YouFine factory would cast an exquisite battle cross statue for you. The Bronze Battle Cross would be the best honor for a soldier. Please feel free to contact us if you want to customize a Fallen Soldier Combat Cross. YouFine would cast you an exquisite Bronze Battle Cross.
Item No: BOK1-291
Size: As Your Requirement
Material: Casting Bronze
Tech: Lost Wax Casting
Feature: Easy Maintain
Place Of Origin: Hebei,China
Superiority 1: Free Custom Made
Superiority 2: Foundry Supplying Directly
Payment Term: By T/T,30% Deposit, And 70% Balance Before Shipping 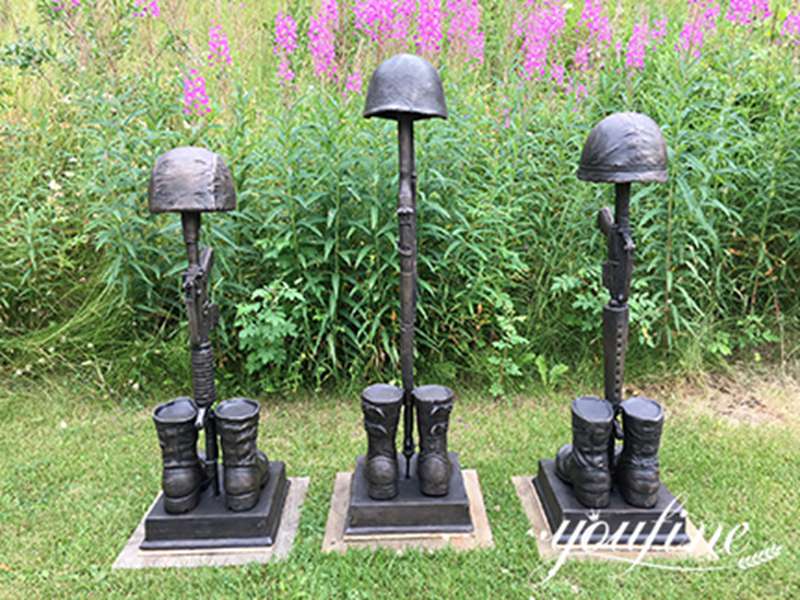 First of all, the bronze battle cross statue consists of rifles, boots, and hats. Rifles pierce the ground, signifying that soldiers died in battle and fought to the end. In addition, the boots carried a soldier through the fight for freedom and were placed on the bottom of the rifle. Also, the helmet was placed on top of the rifle, signifying that that was over in battle. 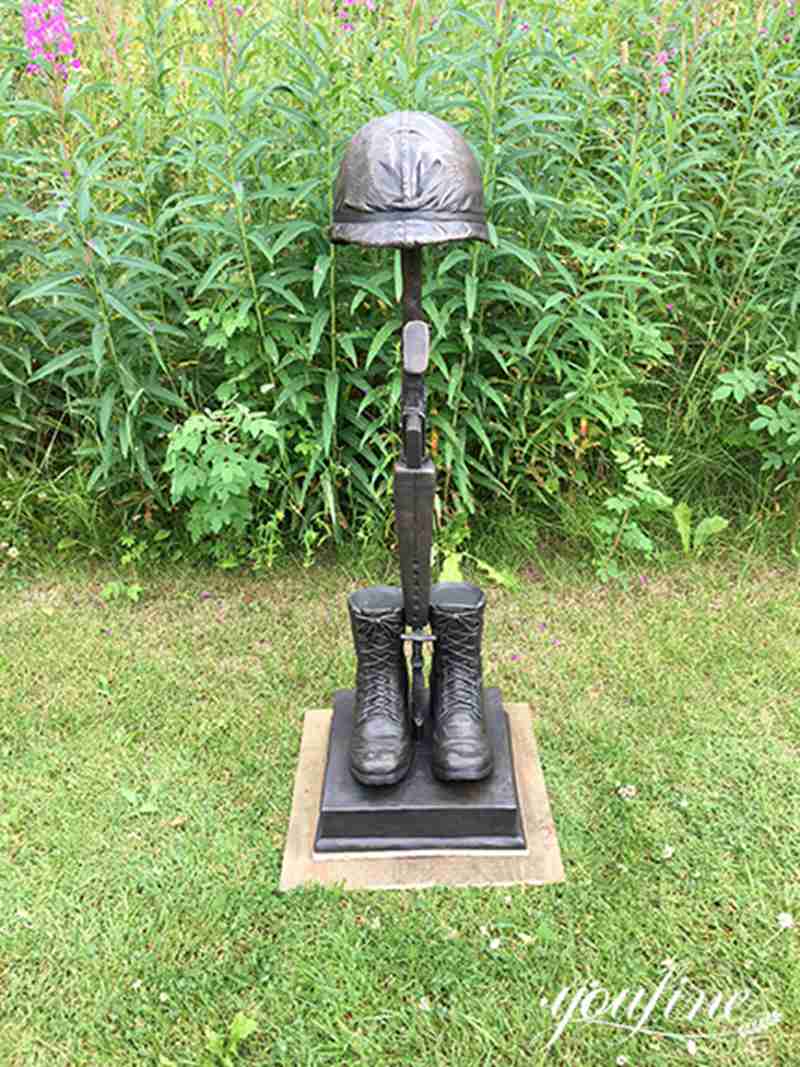 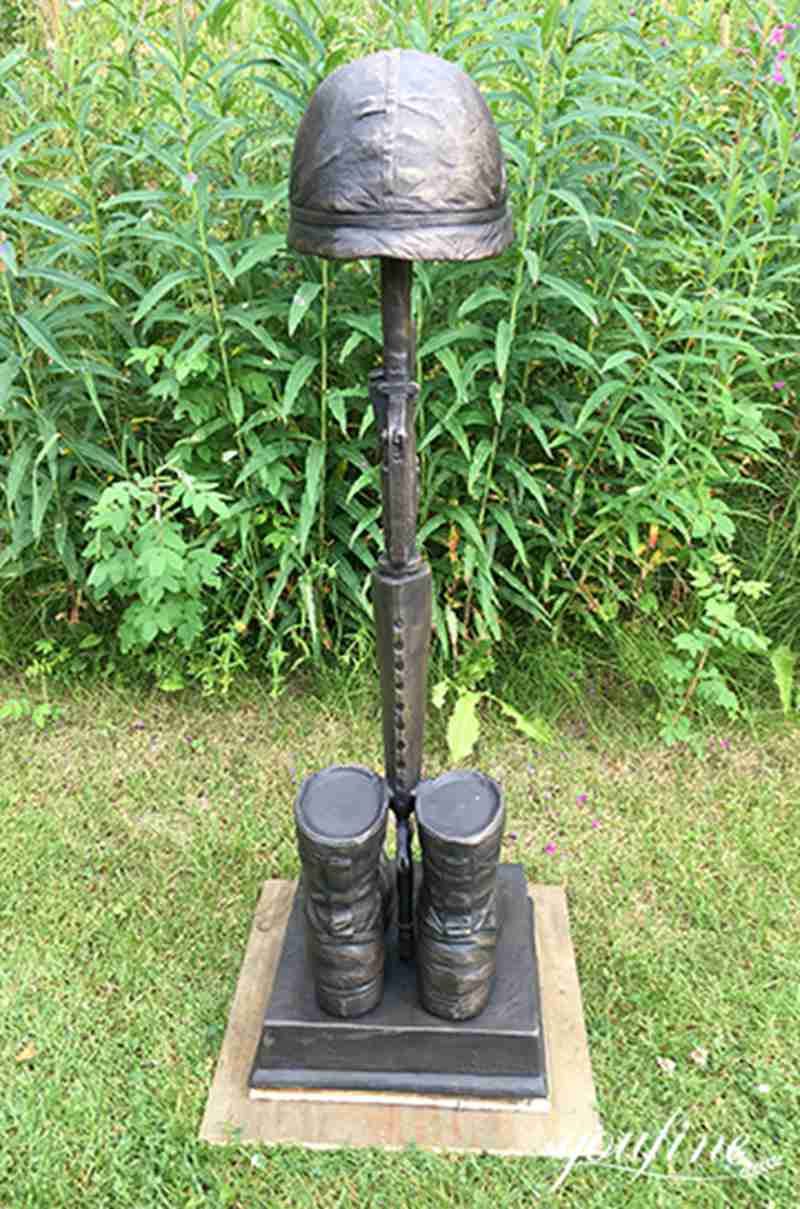 History of the Battlefield Cross:

The earliest Battle Crosses are thought to have appeared during the Civil War. During the Korean War, the Field Cross became a way for comrades of fallen soldiers to find and honor their comrades. During the 1991 Gulf War, and during Operation Iraqi Freedom and Enduring Freedom, the Modern Battlefield Cross became a sacrifice, honor, and respect for fallen soldiers. And, the Field Cross is a moving and powerful way to honor the sacrifices of soldiers. 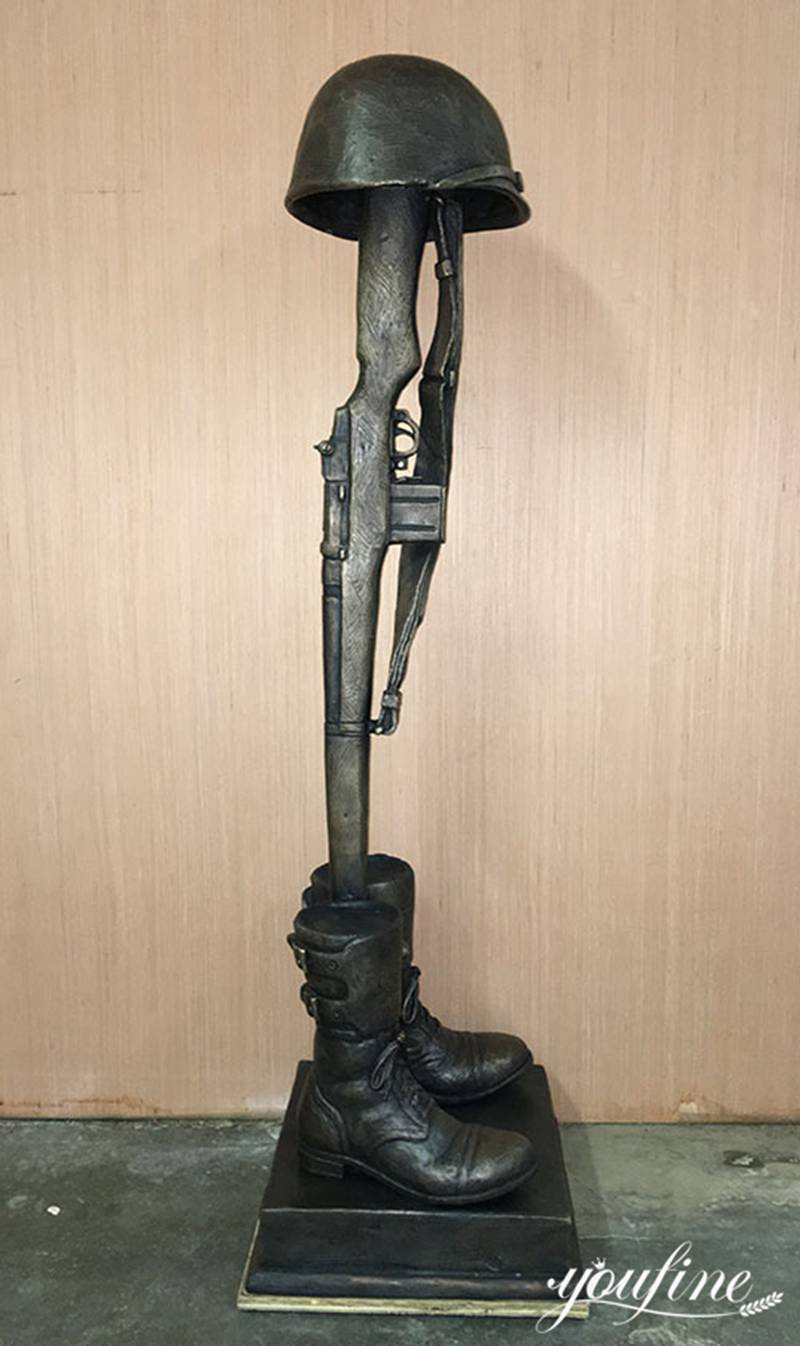 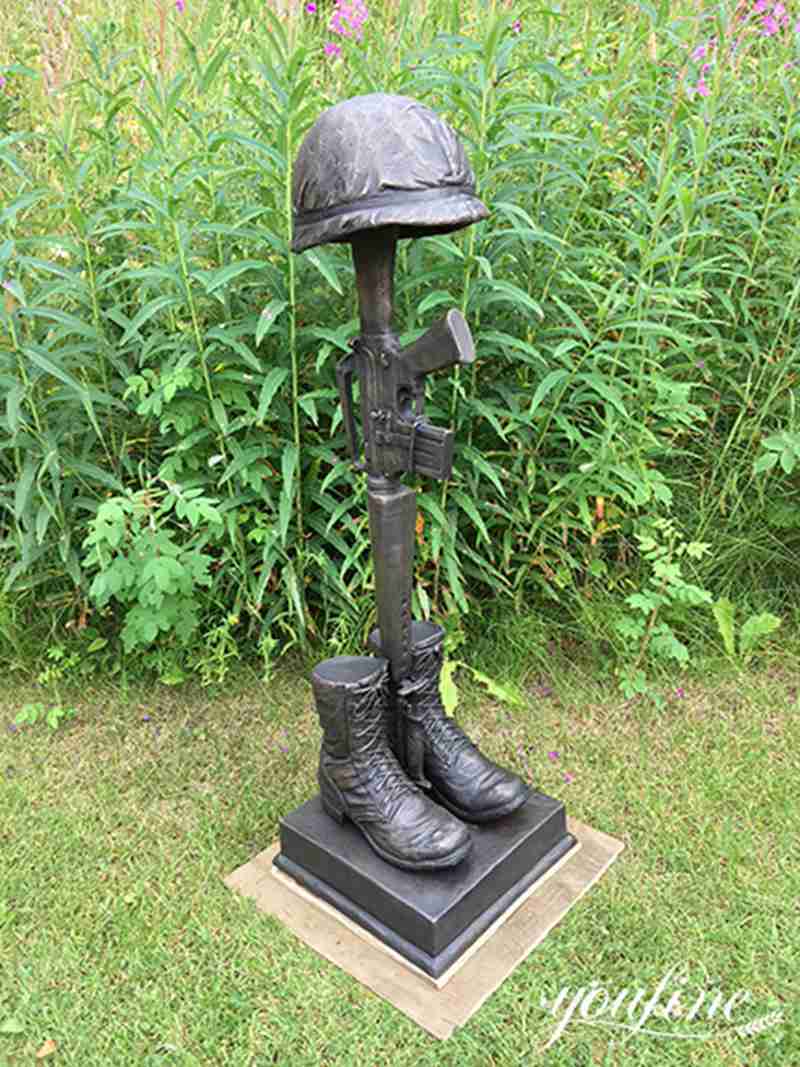 The YouFine Factory Field Cross is accurate in every detail. The life-size monument is 41 inches tall. Of course, our positions and equipment are placed according to the Battlefield Crossing Ritual. Cast in premium bronze using the traditional lost wax method at the YouFine factory. 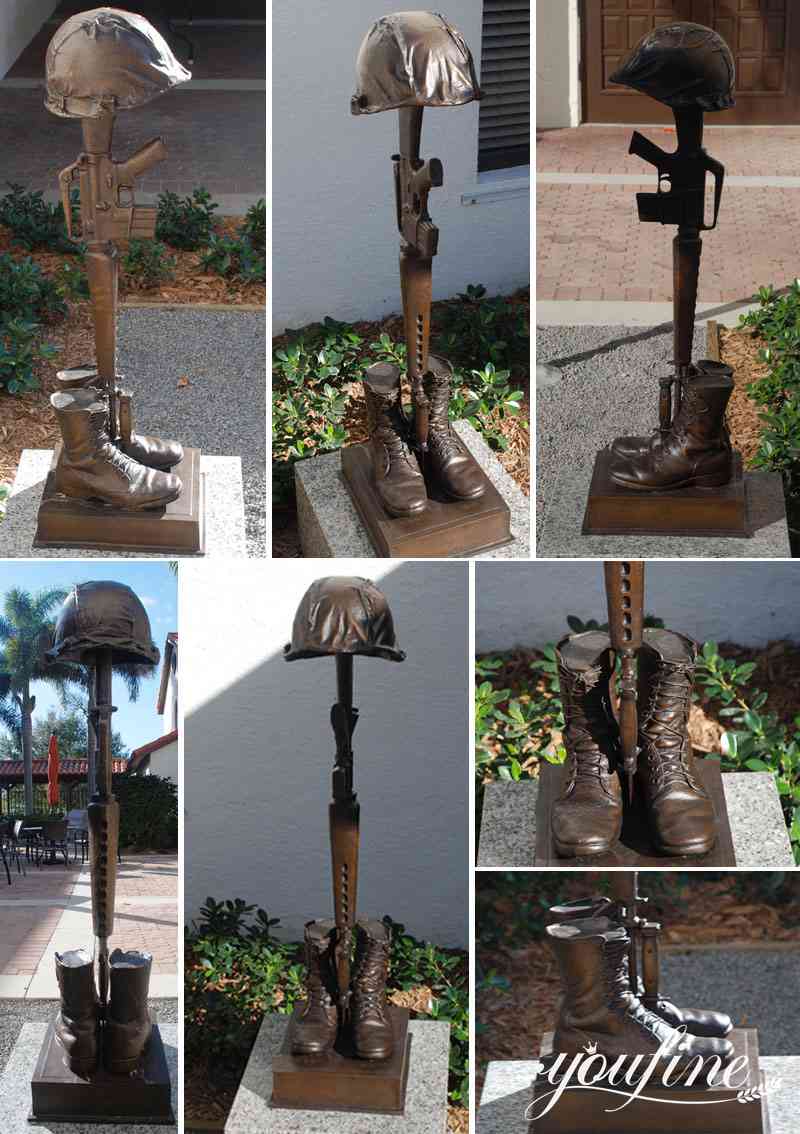 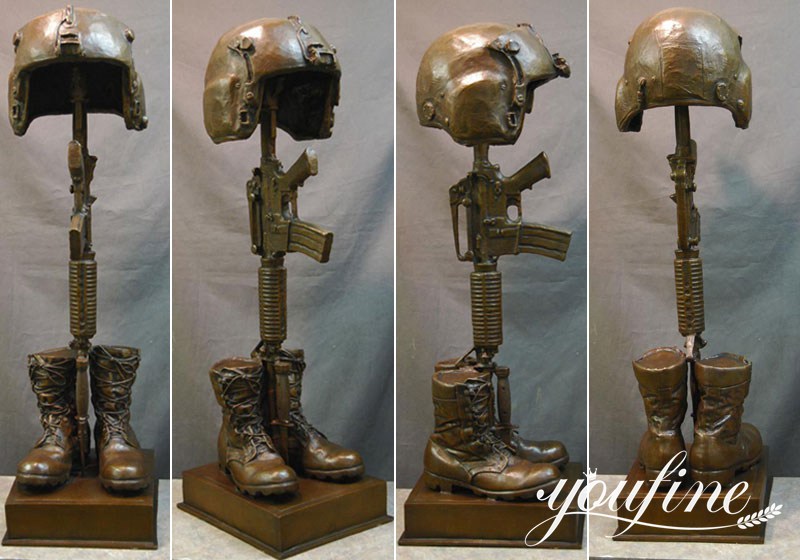 Our battle cross statues are of high quality. We use the best bronze materials. YouFine Factory Bronze artist with a long-standing reputation for casting military sculptures. Our premium bronze casts higher quality, more durable, and longer-lasting military sculptures. Due to the high quality of our bronzes, your bronze battle cross statue cast from the YouFine factory would last almost forever and be passed down from generation to generation. 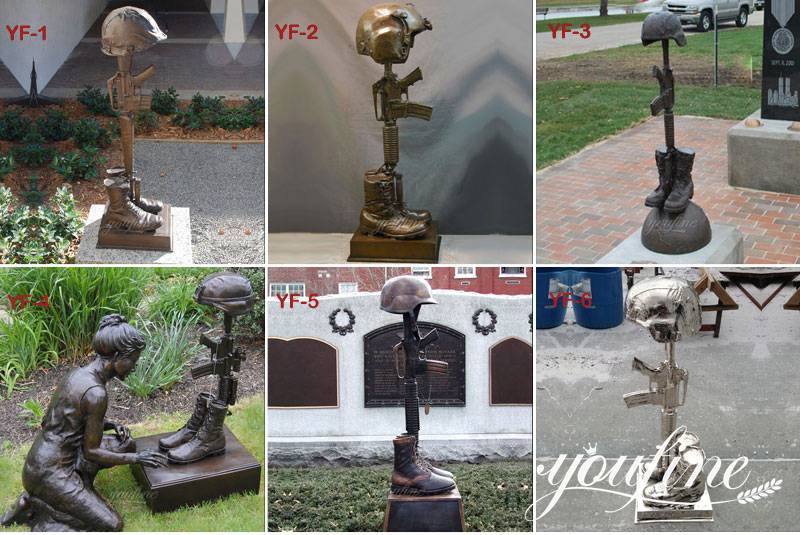 Let YouFine Factory help you create the custom bronze sculpture of your dreams. It all starts with a simple phone call or email. Please feel free to contact us for different styles of battle cross statues.