This is a Zeus and Ganymede statue made of marble, which vividly displays the gods in Greek mythology in front of people. For more information about our sculptures, please feel free to contact us for more information.
Item No: MOKK-287
Material: Natural White Marble
Insurance: Cover All the Risk
Package: Strong Wooden Case
Size: Customized Size
Material: Natural Marble
About Us: 39 Years Factory
Insurance: Cover all the risk

The almost triangular composition of this marble Zeus and Ganymede statue is a peaceful scene. The image of Zeus in this sculpture is an eagle. The eagle’s beak is sharp and claws powerful, and it is very vivid in drinking the wine in the glass. We could see Ganymede and the Eagles are almost at the same level. Ganymede knelt down and poured wine for the eagle. They were apparently calm and comfortable in front of each other – almost like a child with a puppy. The boy’s smooth skin and his trusting nature are on full display. This is juxtaposed with the detailed rendering of the eagle’s feathers, its rough appearance and pointed beak. Such Ganymede and Zeus eagle sculptures look very vivid and fascinating. Such a sculpture is a good choice whether it is decorated indoors or outdoors. 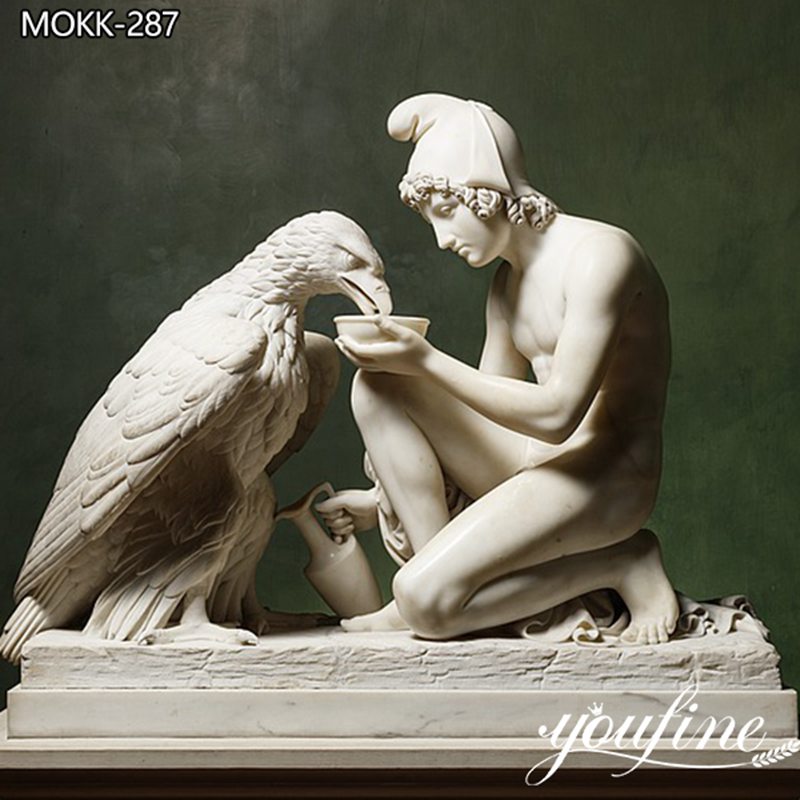 In Greek mythology, the boy Ganymede was taken to the sky, to the house of the gods on Mount Olympus, to become the gods’ taster. Legend has it that Zeus in the shape of an eagle took the beautiful boy from Phrygia in northwestern Asia Minor (Turkey). Ganymede would replace Hebe as the taster of the gods as she spills the drink that immortalizes the gods – nectar. 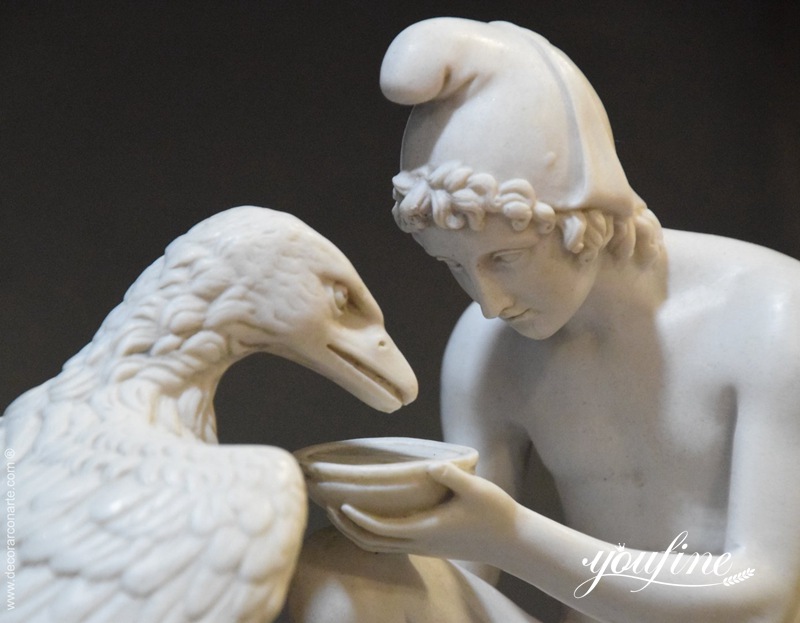 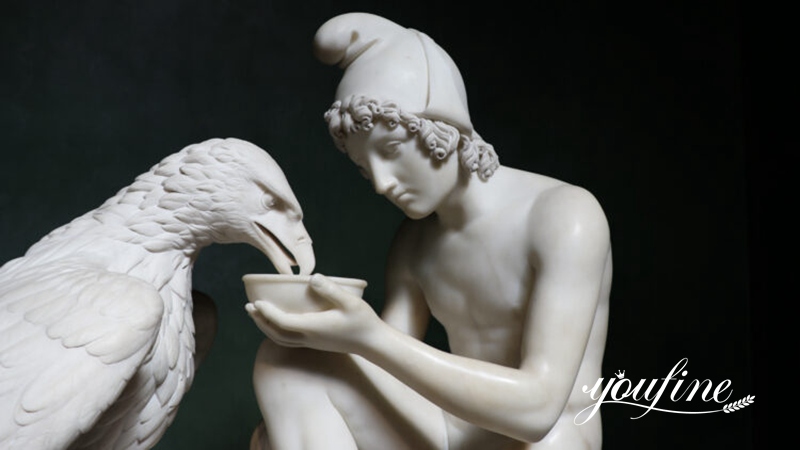 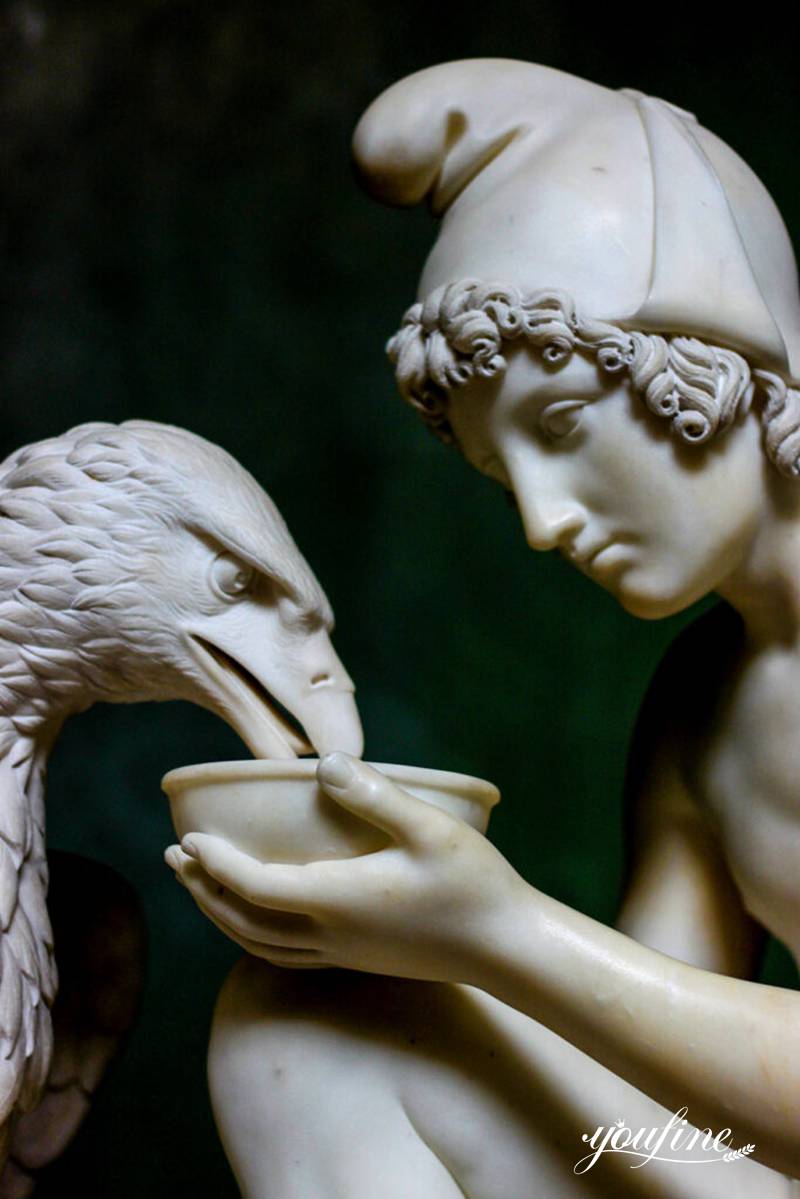 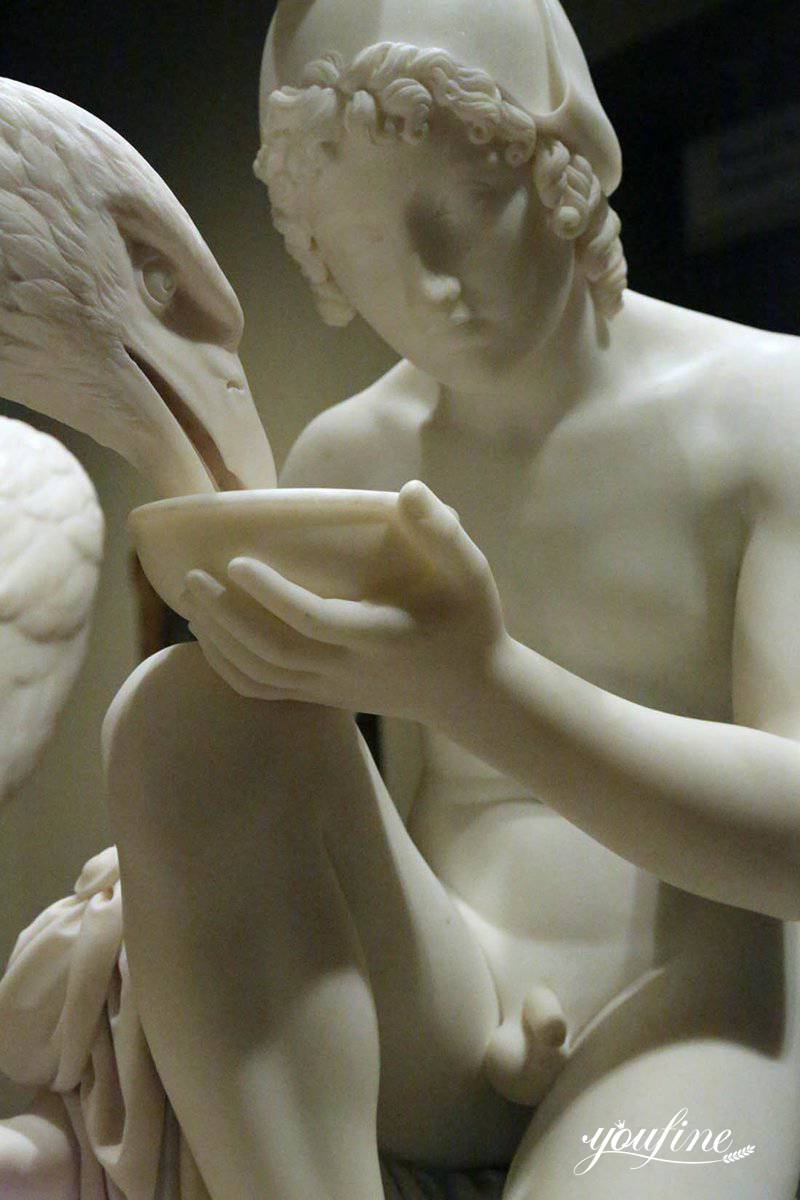 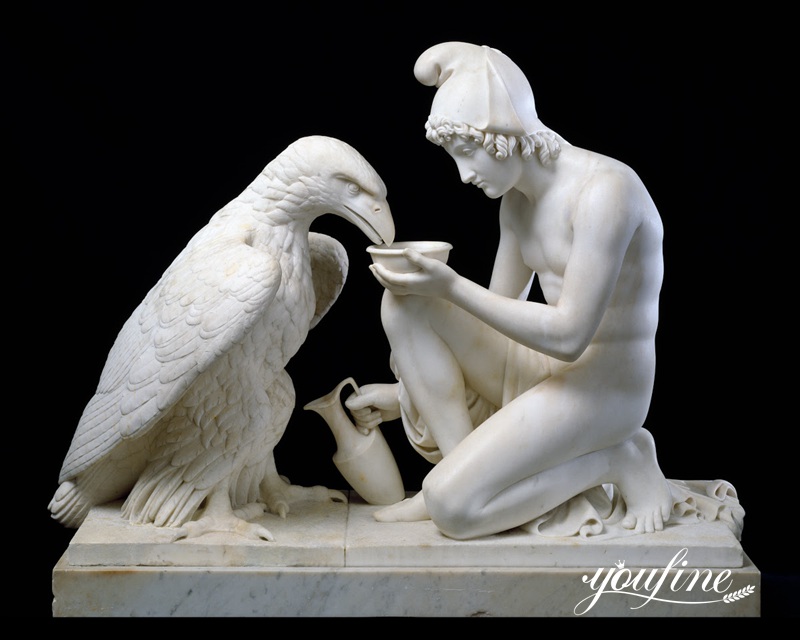 About the Original Work of Zeus and Ganymede Statue:

The original Zeus and Ganymede statue was modeled by artist Thorvaldsen in 1817. It has many marble replicas. Bertel Thorvaldsen was a famous Danish sculptor who worked mainly in Rome in the 19th century, and he produced several sculptures of Ganymede. The best are Ganymede and the Eagle of Jupiter (Zeus). Early works show a standing Ganymede providing a cup, while later rework changes the composition to a more dramatic Ganymede-filled cup. Marble replicas are on display at the Thorvaldsens Museum in Copenhagen, Denmark, two of which are believed to have been carved by the master himself. The museum is famous for having all the plaster casts of Bertel Thorvaldsen (1770-1844), as well as several works sculpted in marble. 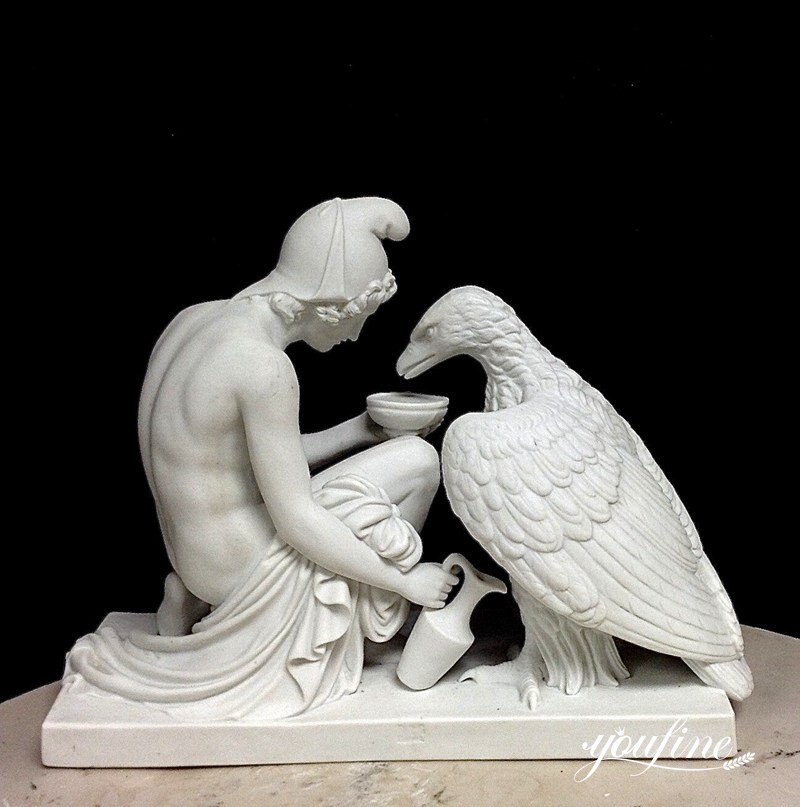 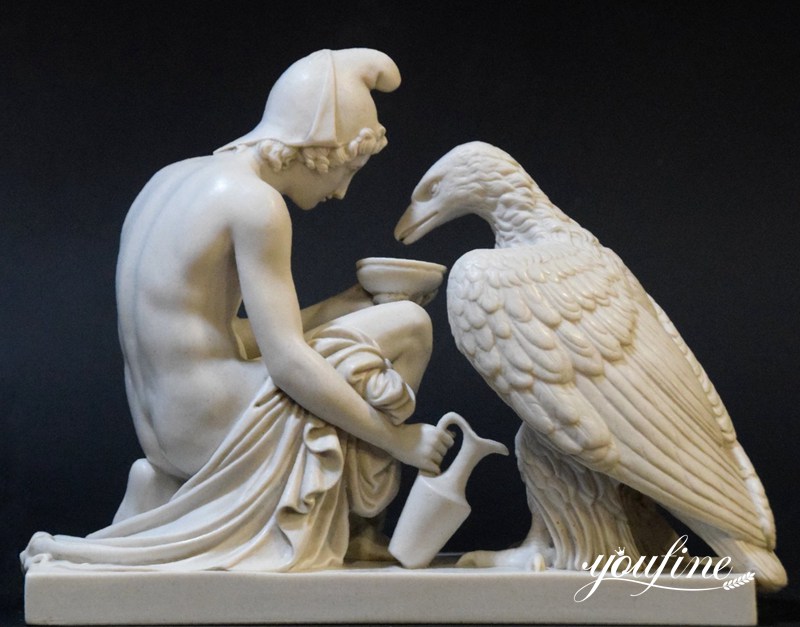 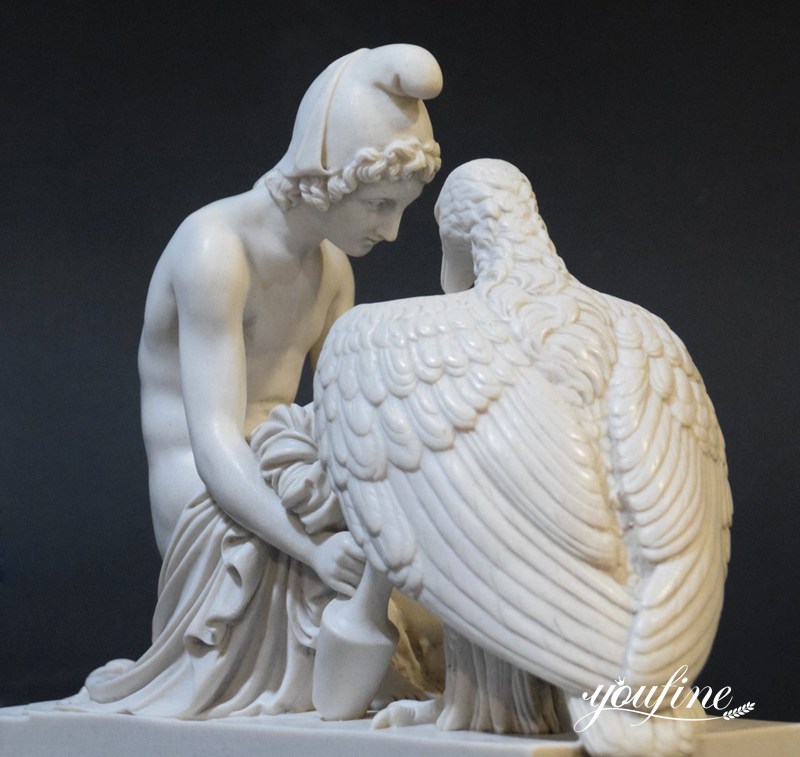 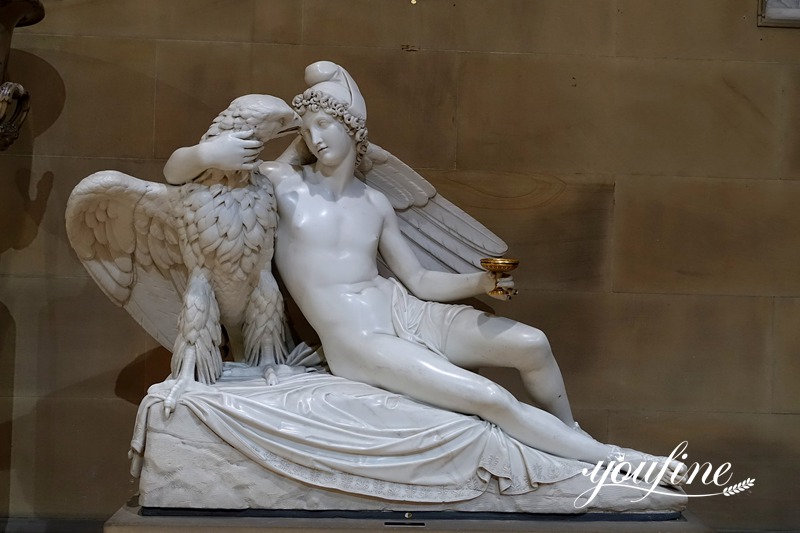 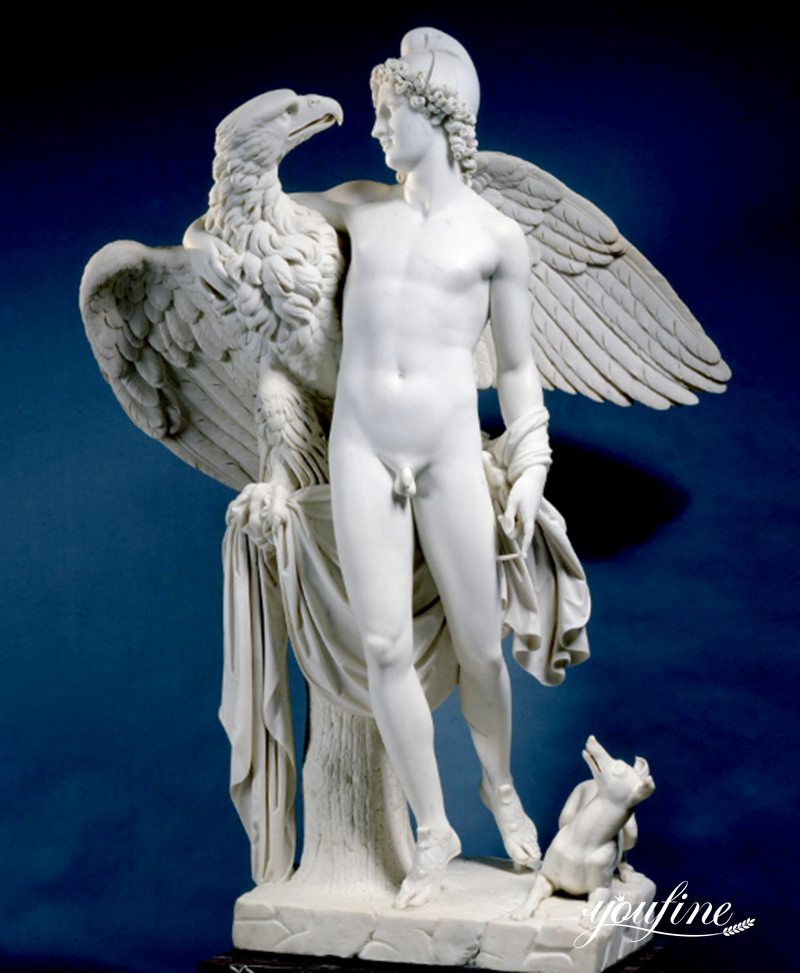 What YouFine Could Do for You:

YouFine is a marble carving factory established for many years, we have 39 years of experience in marble carving, and our artists have carved many classic marble figures. We could provide you with a variety of designs and options for statues of Greek mythological figures. At the same time, we also support customized services. The factory has been committed to pure hand-carving technology, experienced. They have learned carving techniques since childhood and have been engaged in marble carving all the year round. We could make any size to meet your requirements. We would use high quality natural marble material for all sculptures to ensure natural and realistic sculptures. 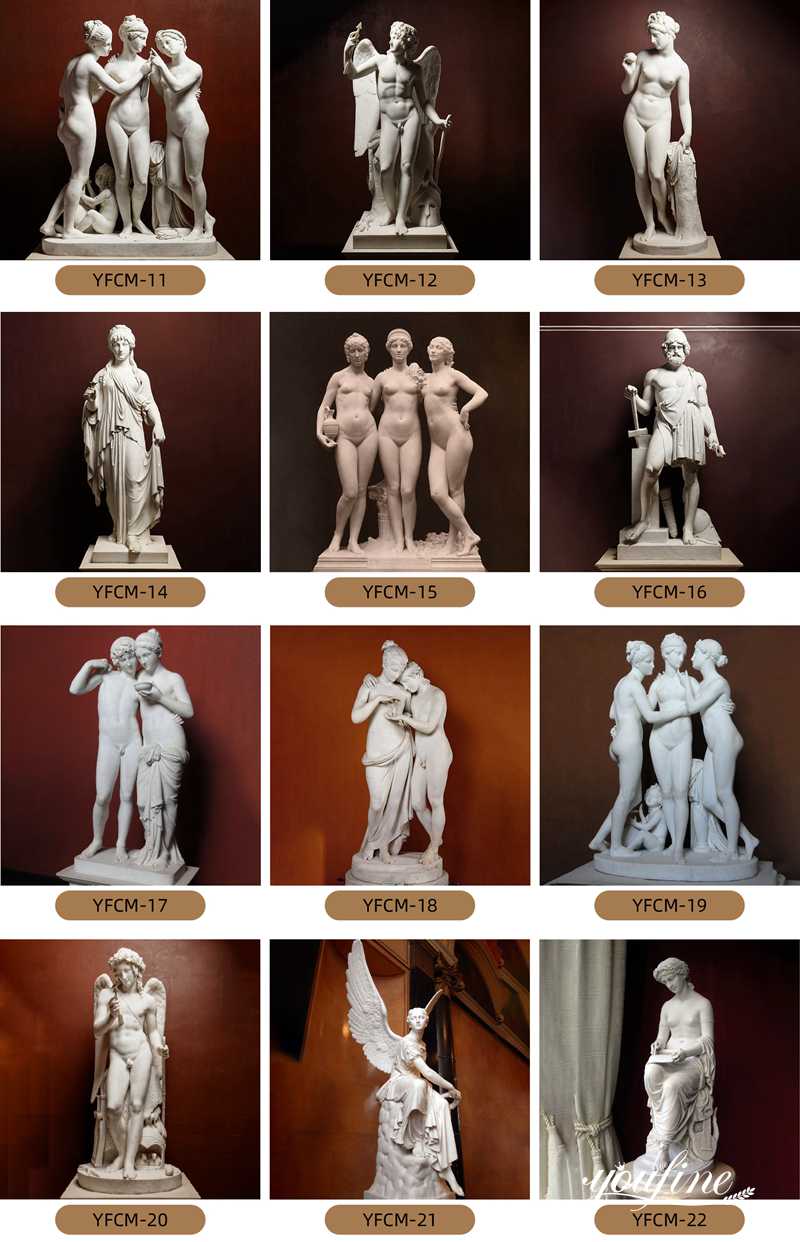 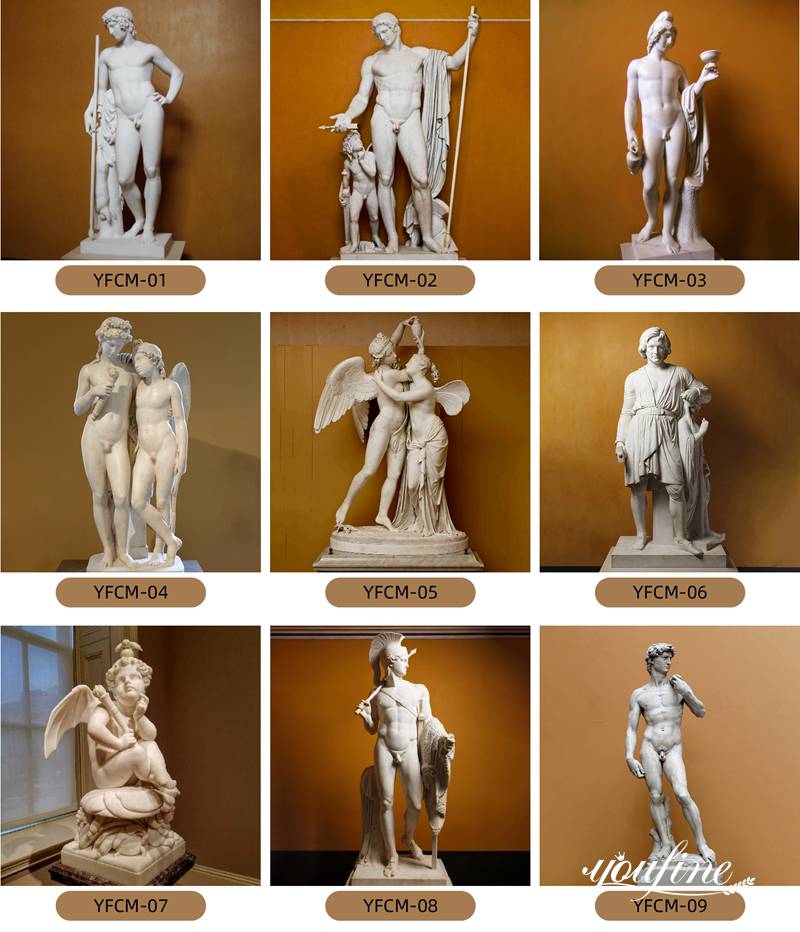 If you want to know more about Zeus and Ganymede statue, please feel free to contact us.