Buildings in ancient Greece often had many columns like this lined up around them. Search on the Internet for pictures of the Parthenon, located at the top of a hill called the Acropolis, in Athens. What might it have felt like to climb that hill and approach a building lined with huge columns like this?
Item No: MOKK-164
Material: 100% Natural Material ( Marble, Granite, Sandstone,Stone,Limestone)
Usage: Garden,Hotel,Home,Piazza Decoration,Weeding
Technical: Full Hand Carved
Surface :High Polished or Honed
Style; Western, Modern
Design: We Can Take Orders According to Photo or Drawing from You.
OEM&ODM: Yes

This Marble statue column, carved with Lady  and delicate winding vines, may come from Hadrian’s Villa, a sprawling estate several miles east of Rome.The Roman Empire was at its most expansive under Hadrian, who developed a love of travel as he maintained the empire’s shifting borders. Hadrian sought to re-create various parts of the empire within the grounds of his massive villa 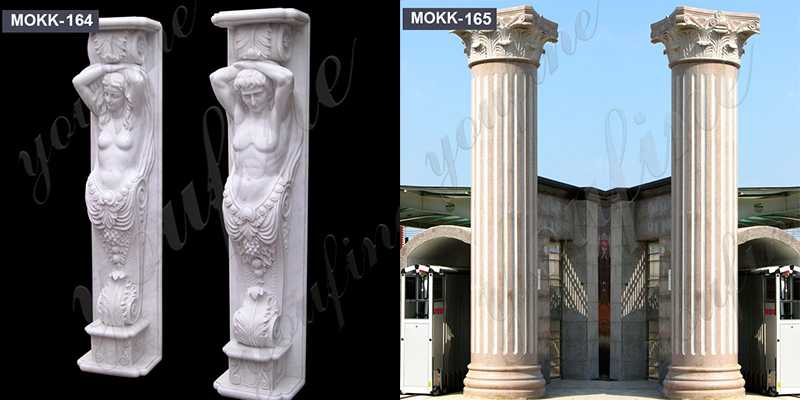 Columns, columns, everywhere! Wedding Columns like this one were invented in ancient Greece and were used in temples and other ancient public buildings, such as the Parthenon in Athens. Notice that the column is wider at the bottom than at the top. This may have been done to correct an optical illusion: from a distance, straight lines can look curved (who knew?). The Greeks wanted their buildings to look perfectly straight and orderly.

Temples were often vibrantly painted in real life. How do you think a statue column like this would look with a bit of color? Draw an Ionic column, with scrolls at the top, on a piece of paper and add color with pencils or crayons. Do you like it better all white or with color?

If you have any question about the marble statue  column, please feel free to contact us!