Marble Greek myth Artemis statue, which could also be called a statue of Goddess Diana, statue gift idea for house decoration. The goddess of Diana is hunting for Versailles. Artemis statue for sale was one of the most revered ancient Greek deities, and her temple in Ephesus was one of the Seven Wonders of the Ancient world.
Item No: MOKK-72
Material: Grade A White Marble
Service 1: Custom Acceptable
Service 2: 30 Years Quality Guarantee
Technique: Art-quality Hand Carved, Polished
Package: Standard Package Or Skid Package

The marble statue of Artemis（Diana）is very popular. That is because Artemis was one of the most revered ancient Greek deities, and her temple in Ephesus was one of the Seven Wonders of the Ancient world. The symbols of Artemis included the bow and arrow, the quiver and the hunting knives, and the deer and the cypress were sacred to her. Goddess Diana is her Roman equivalent. The persona of Artemis statue for sale and an important aspect of worship was her virginity. And it may seem contradictory to think of her role as a goddess related to childbirth. The idea that Artemis is a virgin goddess seems to be related to her main role as a hunter. 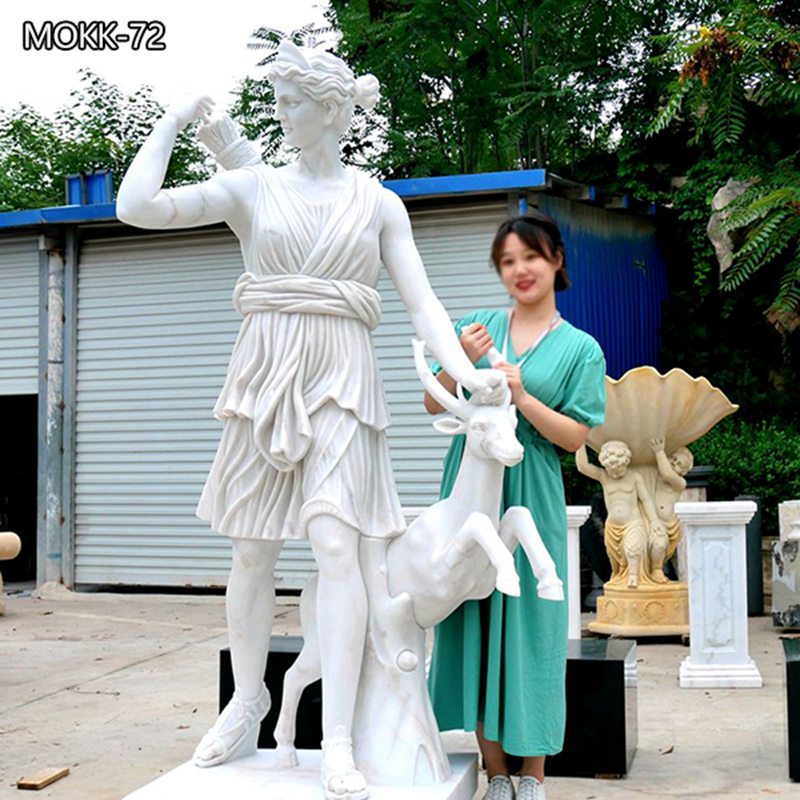 Artemis statue for sale, in the ancient Greek religion and myth, is the goddess of hunting, wildlife, wildlife, the moon, and chastity. Artemis is the daughter of Zeus and Leto and the twin sister of Apollo. She was the protector and protector of young girls and was believed to have caused and rescued women from the disease. Artemide was worshipped as one of the main goddesses of childbirth and obstetrics along with Eileytia. Like Athena and Hestia, Artemida preferred to remain a virgin and swears never to marry. 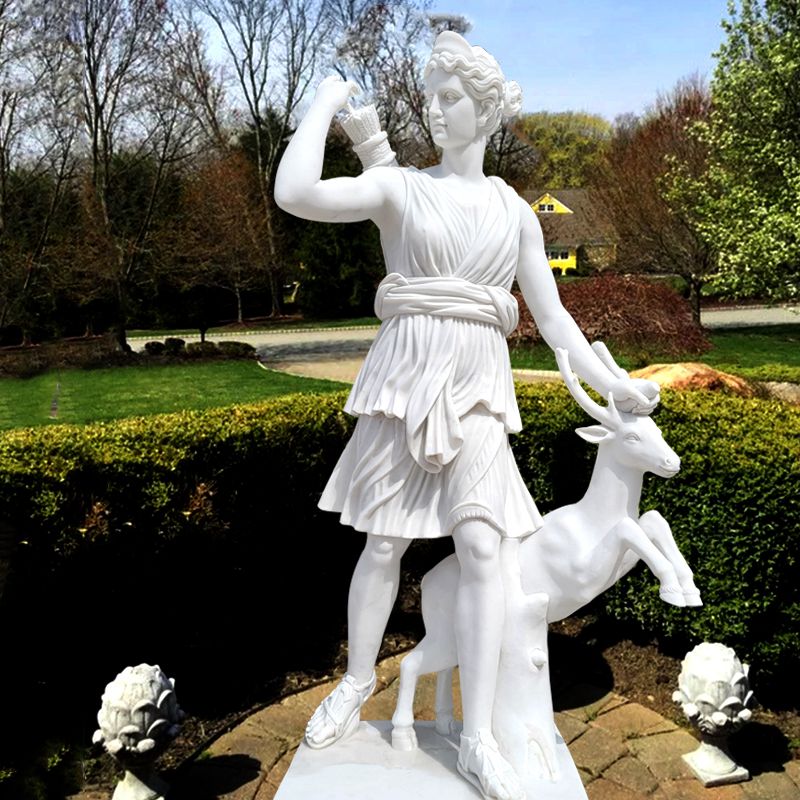 The hunters traditionally refrained from sex before the hunt as a form of ritualistic purity and from the belief that the odor would scare off potential prey. The ancient cultural context in which the worship of Artemis emerged also claimed that virginity was a prerequisite for marriage and that married women became obedient to their husbands. From this point of view, the Lady of Artemis has to do with her power and independence. 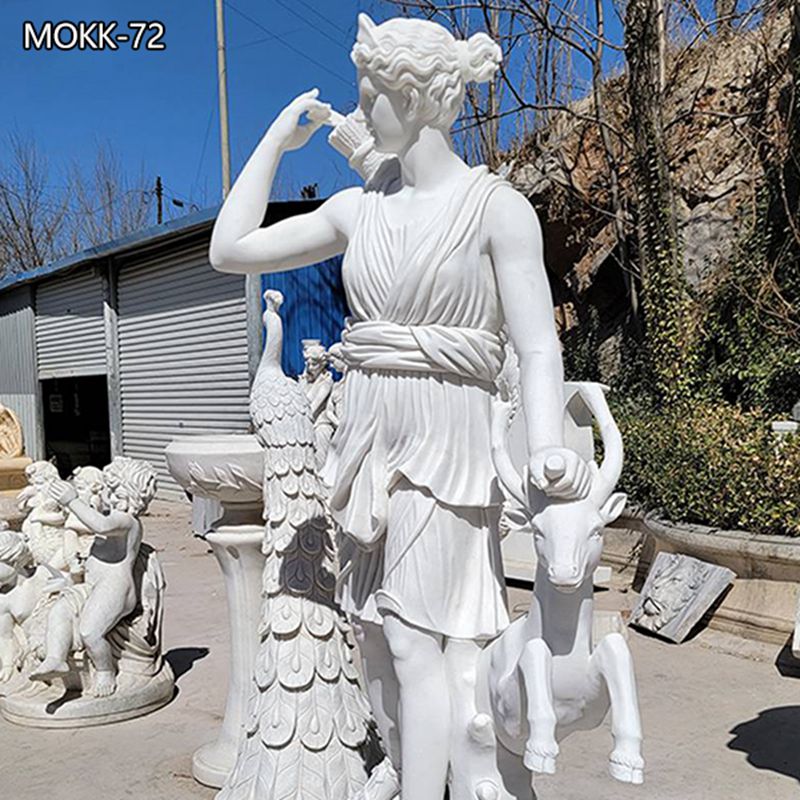 In Roman mythology, Artemis, also known as Diana, was primarily considered the patron saint of the countryside, hunters, crossroads, and the moon. Diana absorbed much of the mythology of Artemis early in Roman history, including being born on Delos to parents Jupiter and Latona, and having a twin brother Apollo, although Diana had a separate origin in Italy. In ancient, medieval and modern times, Diana was considered a triple god, merging with the goddess of the moon (Luna / Selene) and the goddess of the underworld (usually Hecate). 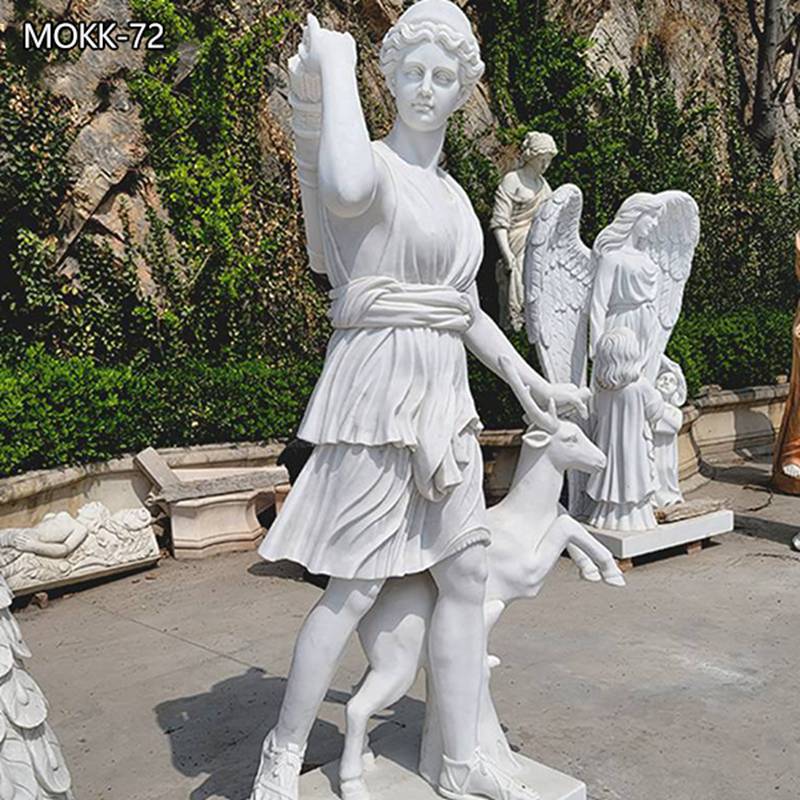 Our marble Diana statue is 100% hand carved by our top artisans. Our artists have decades of carving experience and have learned marble carving techniques since childhood. And they live in the hometown of Chinese sculpture, with the blood of sculpture in their genes. So they are very good at marble carving. So we can see that every detail of our marble hunter statue is so exquisite. And our engraving is very deep and will not be worn easily. So we can guarantee that our marble Artemis statue can accompany our customers for hundreds of years and become a family heirloom. 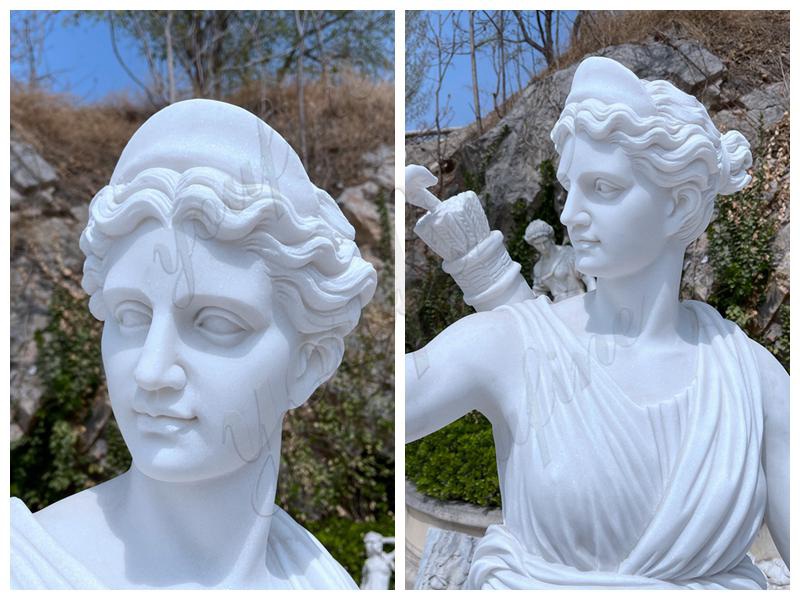 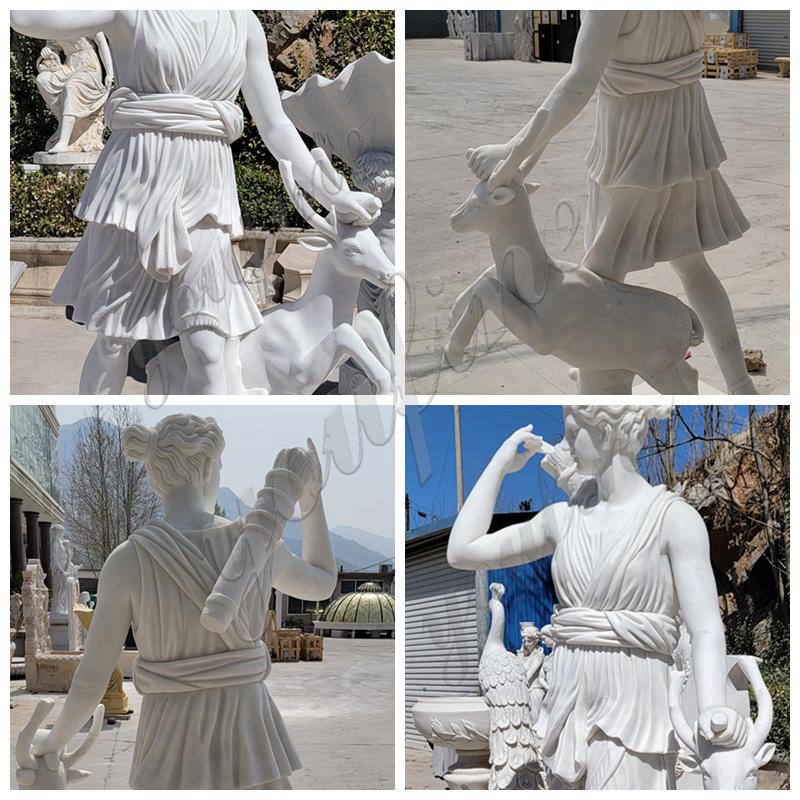 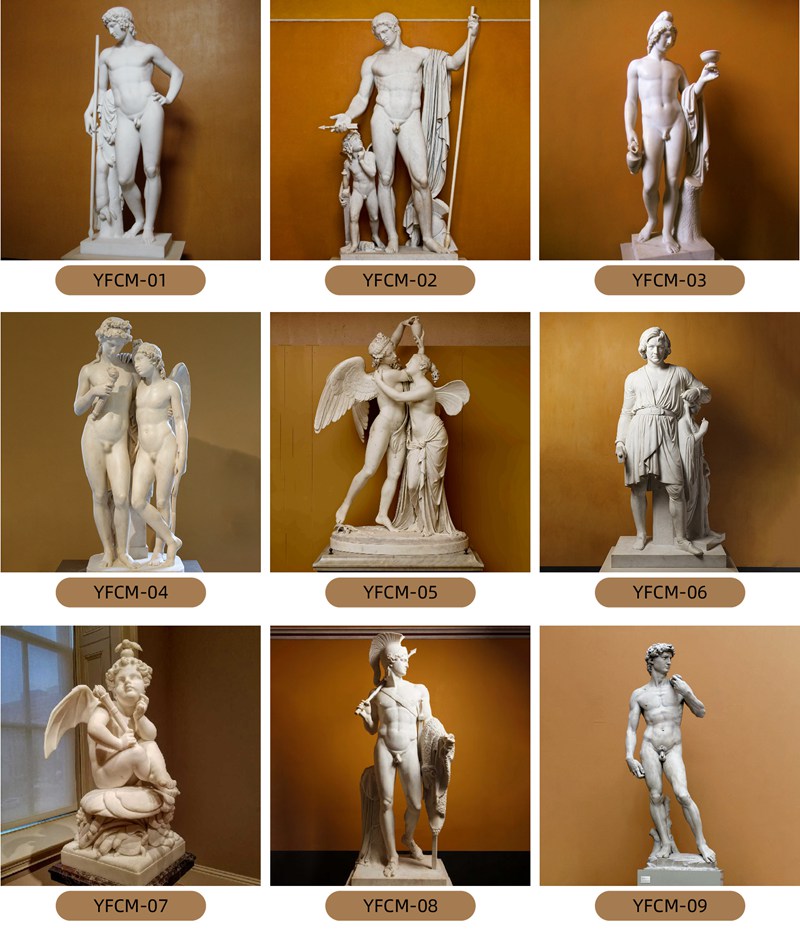 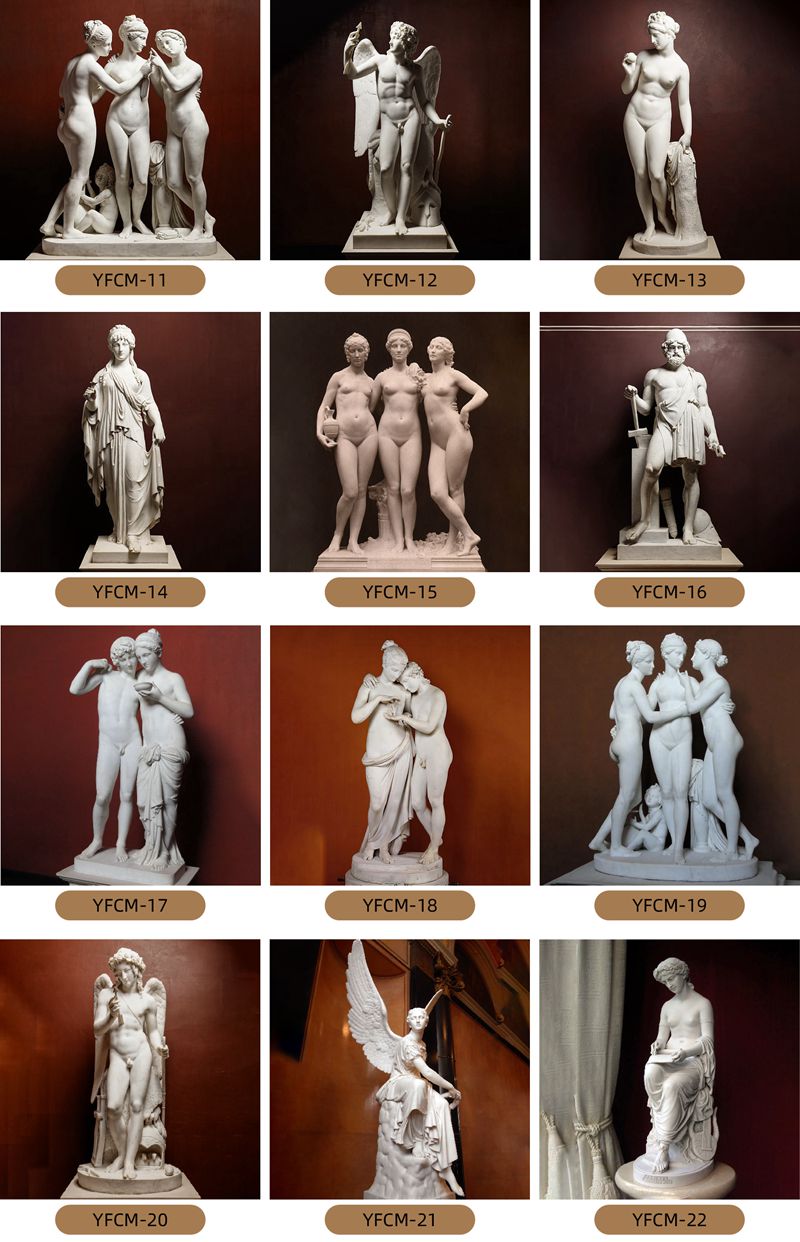 If you are interested in our marble Diana statue, or you want to know more information in our marble statues, please feel free to contact us.