Home » Blog » Where is the Hachiko Statue?
Site Search:

We are all very familiar with Hachiko’s story. In particular, people were moved by Hachiko’s loyalty. Of course, caring people donate together to cast a bronze Hachiko statue. So, let’s learn more about the origin of the dog statue today. Also, please feel free to contact us if you want to cast a Hachiko sculpture. The artists at the YouFine factory could cast a bronze dog sculpture to your satisfaction.

Anyone who has been to Shibuya must know the story of Hachiko. The Hachiko statue depicts the story of this Akita dog. This loyal Akita has been waiting at the train station every night for years after his owner’s death. 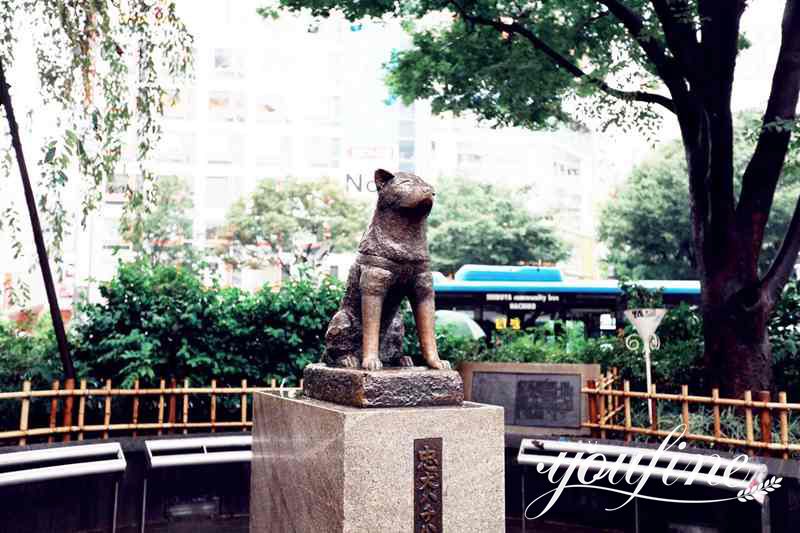 This bronze dog sculpture is cast in high-quality bronze. You could clearly see Hachiko waiting for the master. Of course, YouFine artists could make a copy of the same Hachiko statue. 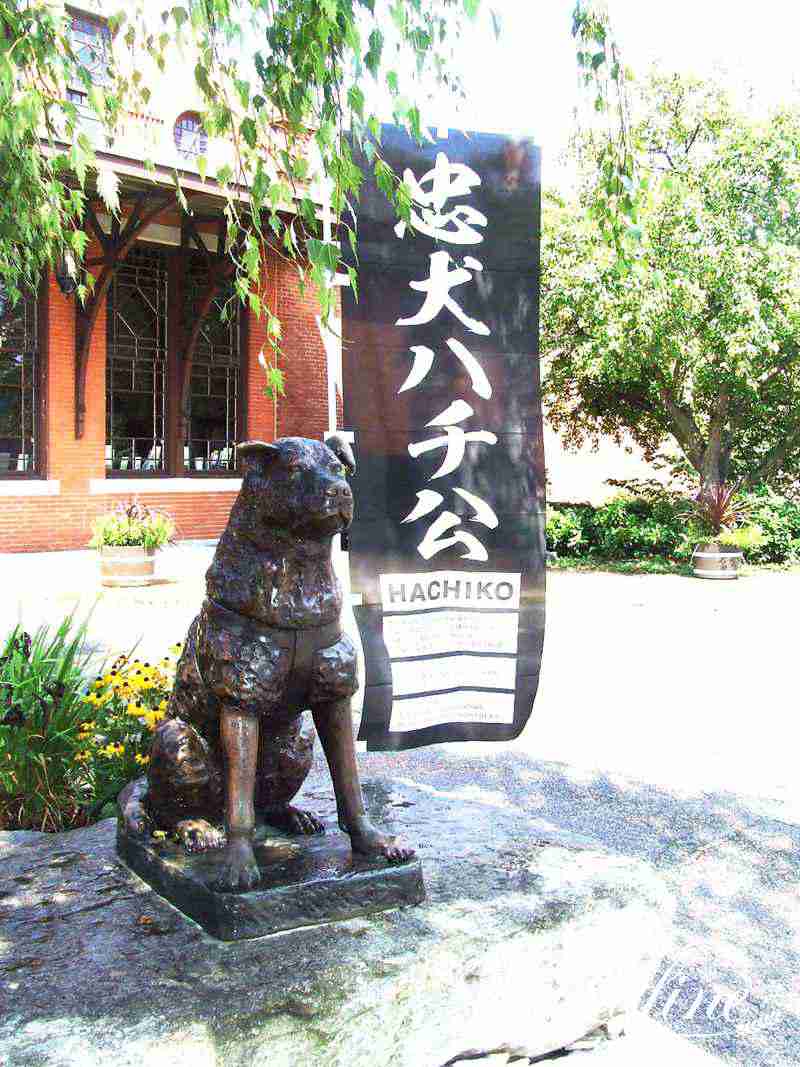 The Story of the Hachiko Statue:

Hachiko is a symbol of loyalty and never-ending love. And, is an idol not only in his native Japan but in the whole world. The golden brown purebred Akita was born in the late fall of 1923. 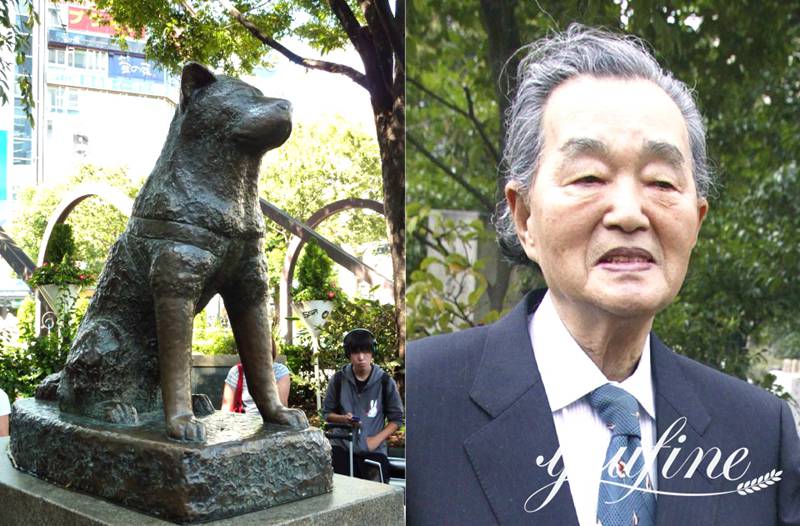 A year later, Hachiko was adopted by a professor, Shusaburo Ueno, who took him in to live in Shibuya, Tokyo. Hide Saburo Ueno is a professor at the Department of Agriculture at Tokyo Imperial University. 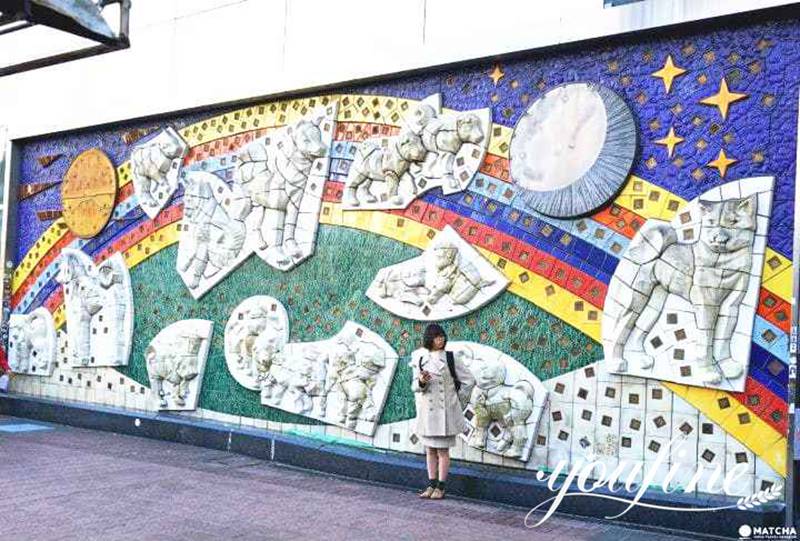 The man would take the train to work, but would be greeted by his loyal dog on the way back. At the end of each day, the smart dog leaves the house and waits for its owner at Shibuya Station. Then Shuzaburo Ueno died of a cerebral hemorrhage during a lecture. Since then, Hachiko has been waiting for the return of the professor at Shibuya Station. 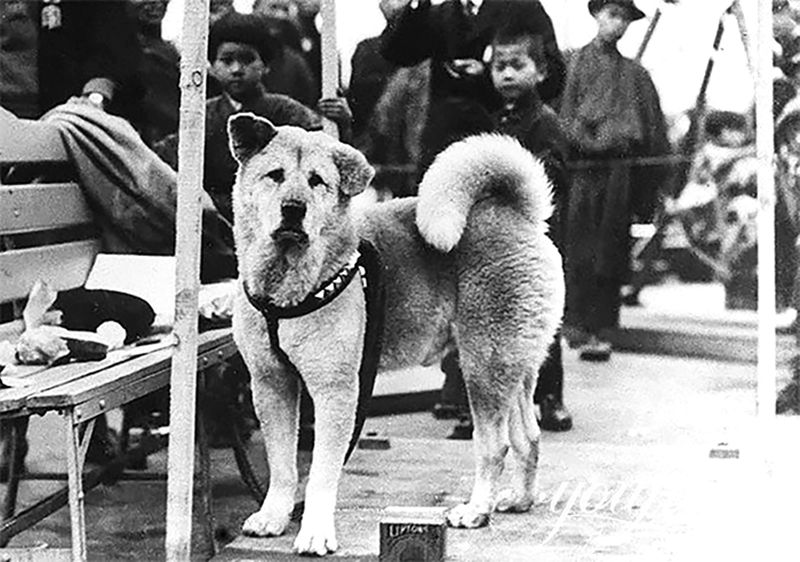 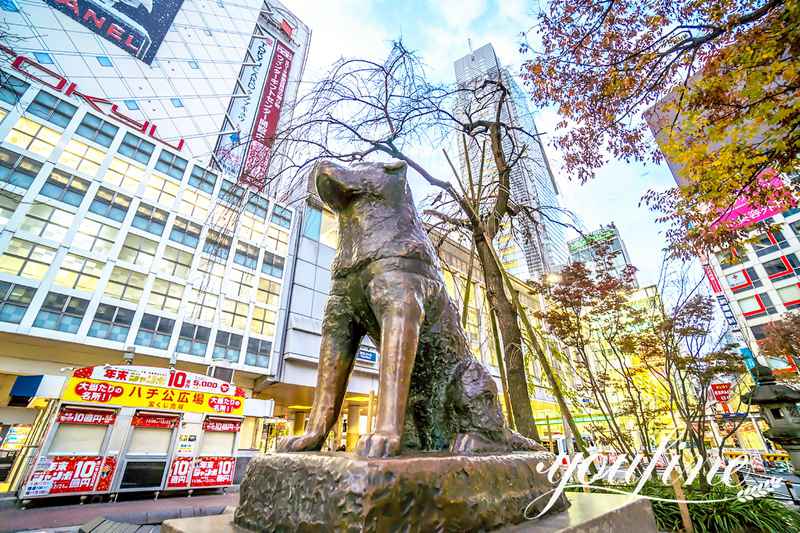 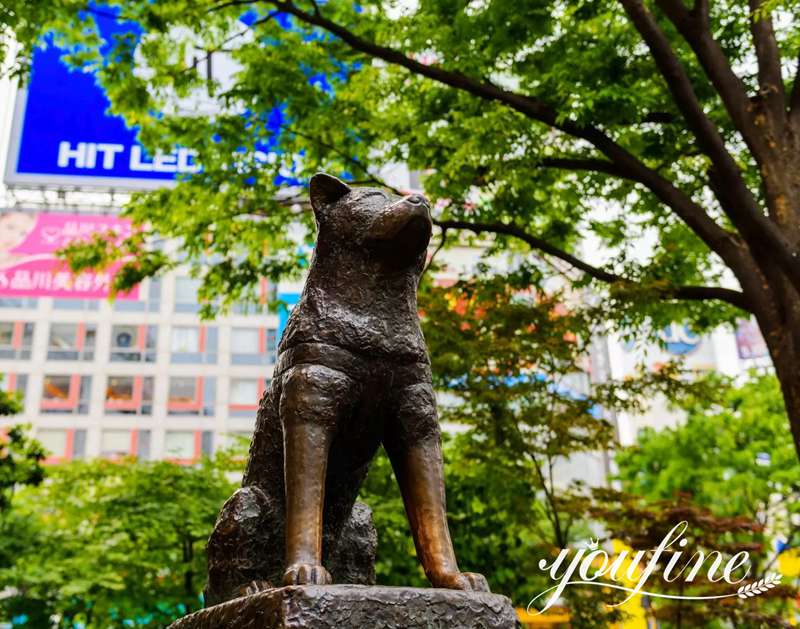 Prof. Hidesaburo Ueno has been a professor of agricultural engineering at the university for over 20 years. In addition, there is also a monument to the Hachiko statue next to the tomb of Professor Ueno at Aoyama Cemetery in Minato-ku, Tokyo. 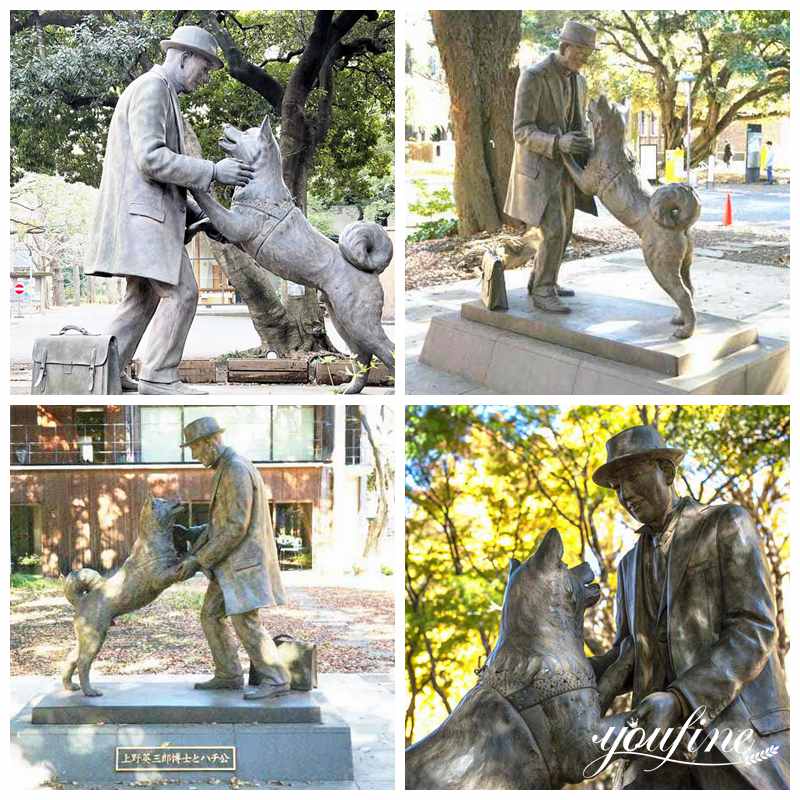 Is Hachiko Still There?

Yes, the new Hachiko statue was erected in August 1948 and still stands today. In addition, the station entrance near the statue is named “Hachikoguchi”, which means “Hachiko entrance/exit”, and is one of the five exits of Shibuya Station. 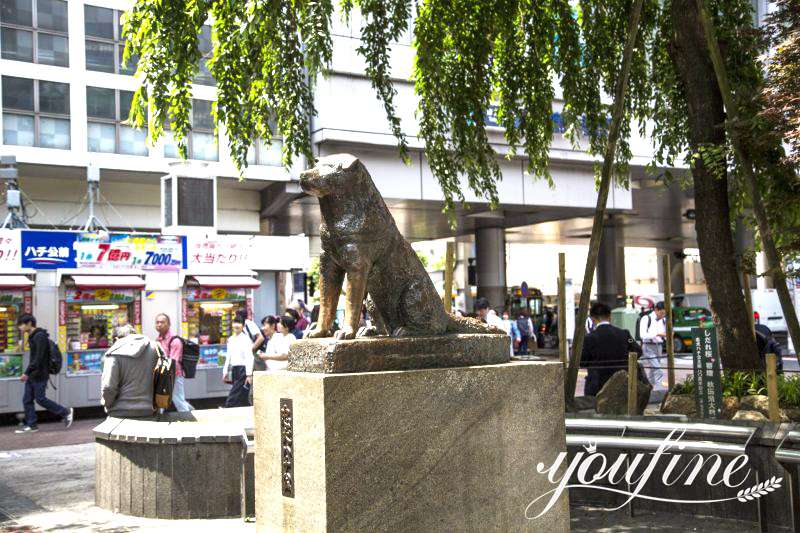 How Big is the Hachiko Statue?

After the professor’s sudden death in 1925, Hachiko continued to wait for his late master at Shibuya Station for 10 years. In 1934, people were moved by Hachiko’s faithful actions. Therefore, people donated money to build a beautiful bronze Hachiko statue of 162 cm. 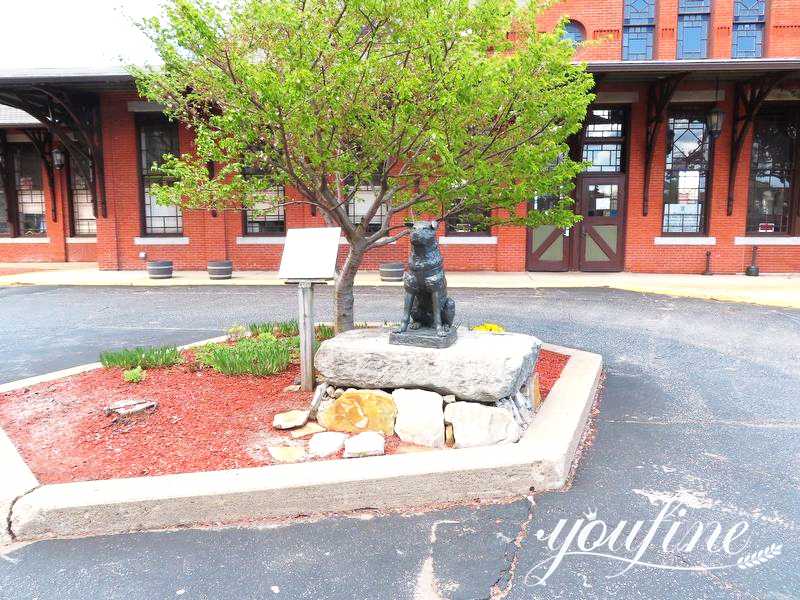 What Happened to the First Hachiko Statue?

During World War II, the first Hachiko statue was melted down into train parts. Some say the metal was used to produce parts for locomotives on what is now the Tokaido Line. After the war, Ando’s son Takeshi built a new statue. Well, this is the one you see in Shibuya today. Statues at Odate Station also melted during the war, and the current bronze statue dates back to 1967. 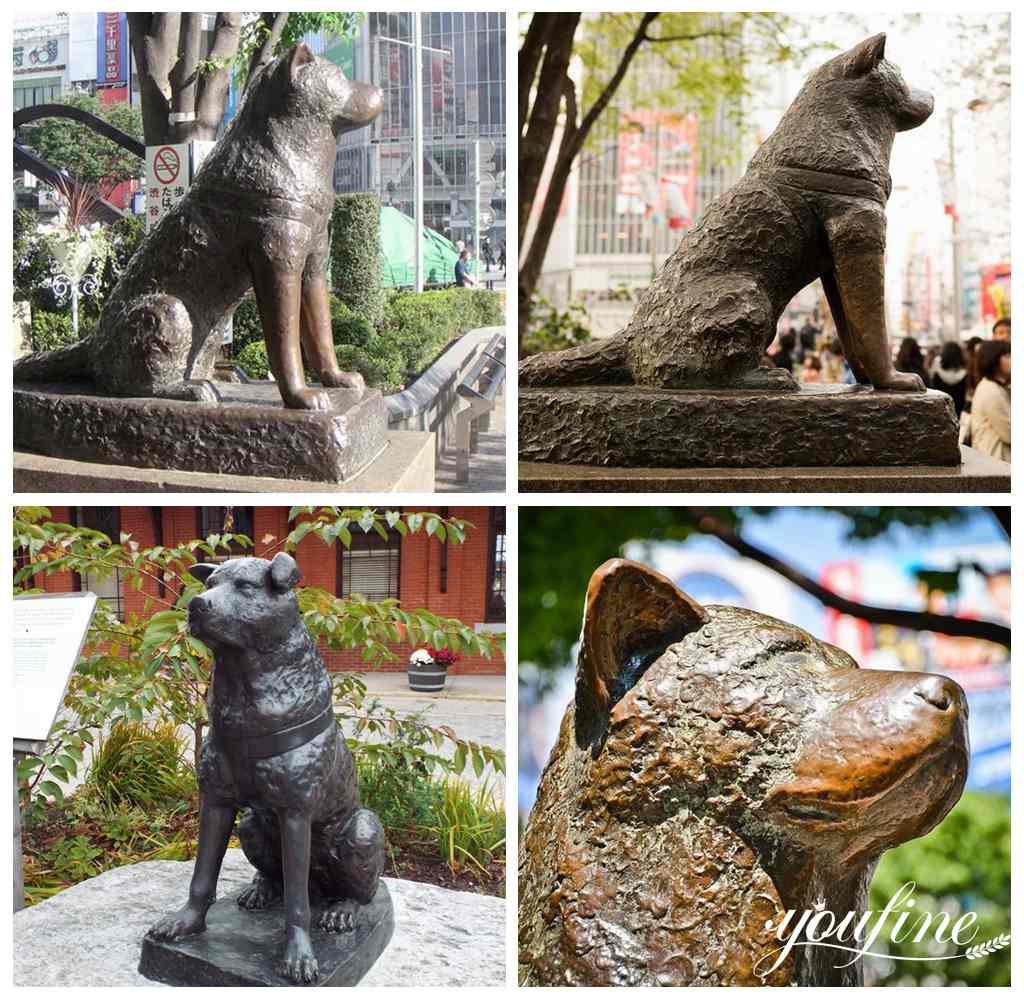 Was Hachiko Buried with the Master?

Yes, Hachiko is buried next to his master. The faithful friend was placed next to the grave of his beloved master, Professor Ueno. In addition, Hachiko’s fur is preserved. In addition, the simulated Hachiko sculpture is on permanent display at the National Science Museum of Japan in Ueno, Tokyo.

YouFine Could Cast Realistic Dog Sculptures for You:

The YouFine factory acts as an experienced bronze sculpture foundry. We cast bronze Hachiko statues for many dog lovers around the world. Of course, they were very pleased with our bronze sculptures. In addition, we could also cast realistic custom bronze sculptures of your beloved dog. 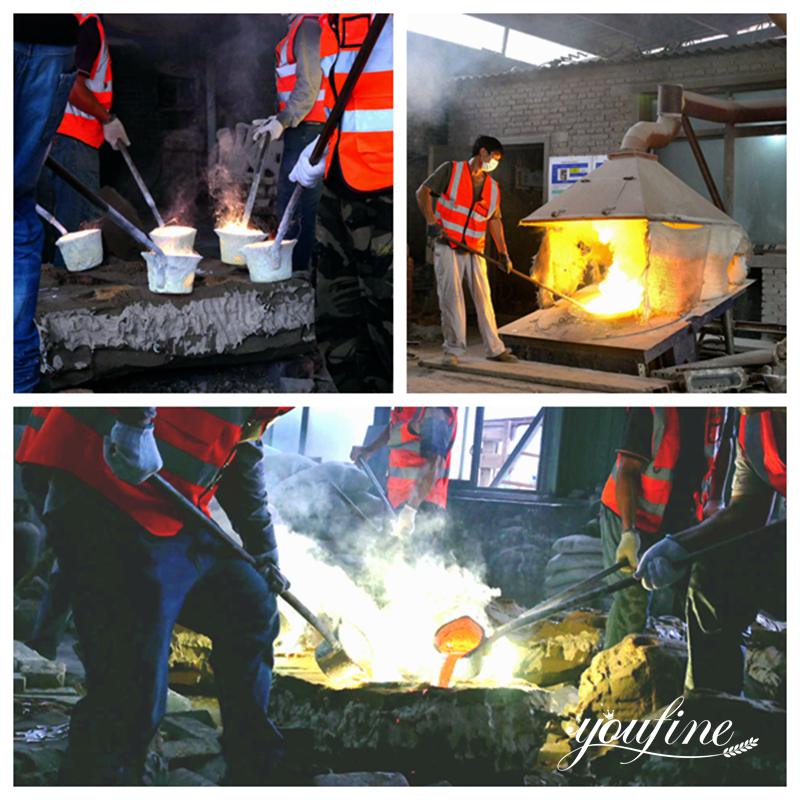 The artists at YouFine use the traditional lost wax method of casting. Therefore, our bronze sculptures are of high quality. In this way, the thickness of bronze could be guaranteed. Of course, bronze dog sculptures have been around longer. 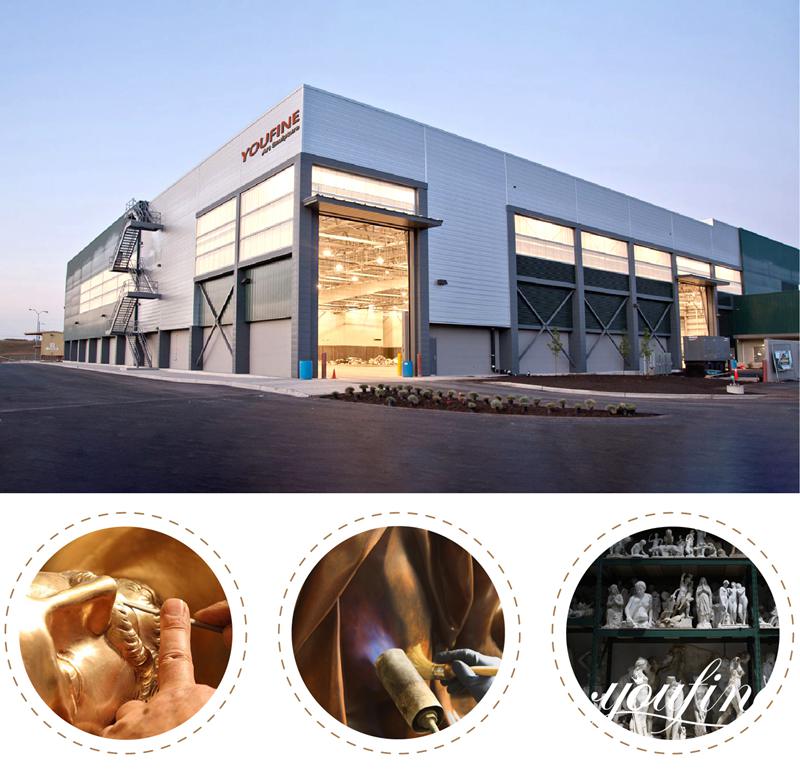 Please feel free to contact us if you want to cast a Hachiko statue. YouFine Factory could give you direct factory prices.