Home » Blog » The Most Comprehensive Introduction To The Rome Trevi Fountain In The World
Site Search:

Basic Information About the Trevi Fountain:

The Trevi Fountain (Italian: Fontana di Trevi) is an 18th century fountain in the Trevi district of Rome, Italy, designed by Italian architect Nicola Salvi and completed by Giuseppe Pannini et al. The massive fountain measures approximately 85 feet (26 meters) high and 160 feet (49 meters) wide. At its center is a statue of the god of the sea, standing on a chariot pulled by a seahorse, accompanied by Triton. The fountain also features statues of abundance and health. Its water comes from an ancient aqueduct called Acqua Vergine, long considered the softest and tastiest water in Rome. For centuries, barrels of it were brought to the Vatican every week. However, the water is now undrinkable. 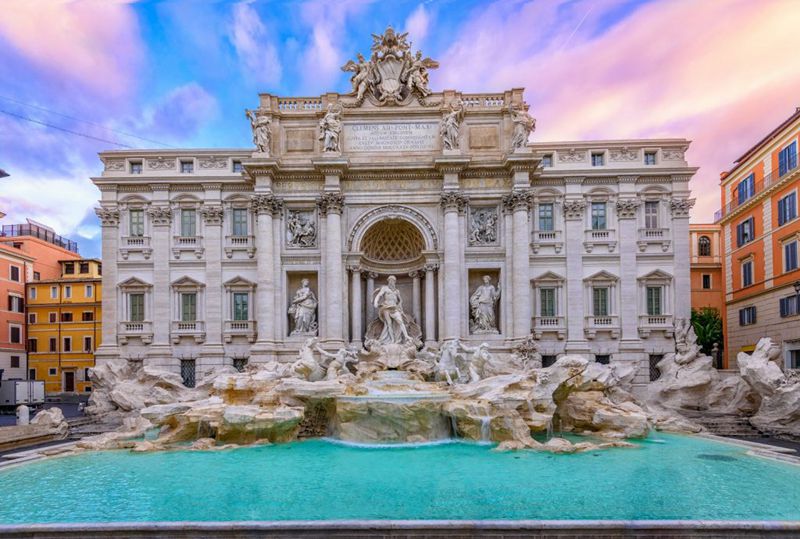 The Trevi Fountain is located in the Trevi district of Rome, next to Palazzo Poli. An earlier fountain on the site was demolished in the 17th century, and in 1732 Nicola Salvi won a competition to design a new fountain. His creation is a landscape spectacle. The idea of ​​combining the facade of the palace and the fountain originated from a project by Pietro da Cortona, but the grandeur of the central Arc de Triomphe with its mythological and allegorical figures, natural rock formations and gushing water is Salvi’s. The Trevi Fountain took about 30 years to complete, and its completion was overseen in 1762 by Giuseppe Pannini, who had slightly altered the original plan after Salvi’s death in 1751. 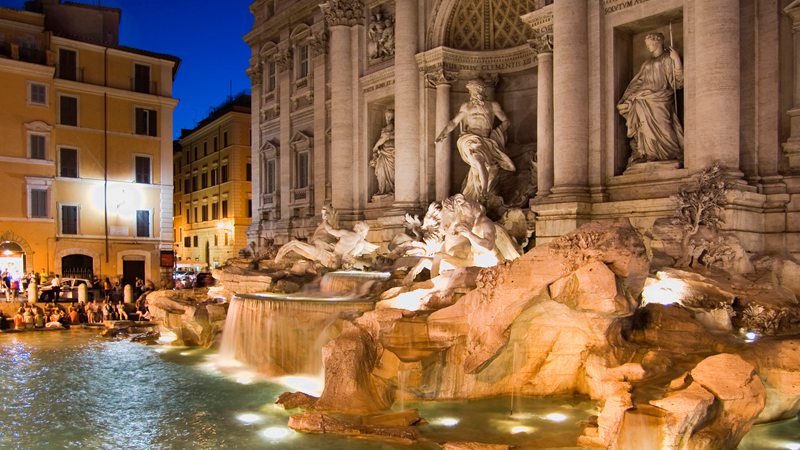 What’s so Special about the Trevi Fountain?

One of the biggest sights in Rome, the Trevi Fountain, at 26 meters high and 49 meters wide, is a must-see in the city. The Trevi Fountain is famous for its intricate artwork decorated in the Baroque style, rich in history and detail. As one of the finest buildings in existence, it demonstrates the skills of ancient Roman craftsmanship. It is an ancient water source that has recently been intensively restored and cleaned by the luxury fashion house Fendi. One of the best evidences of ancient Roman craftsmanship. As the most famous fountain on earth, this iconic landmark is 10,000 years old and well worth a visit in Rome. Visitors who have appeared in many films, artworks and books flock to this much-loved 18th-century Baroque masterpiece for a chance to glimpse the stunning detail and sheer beauty it possesses. 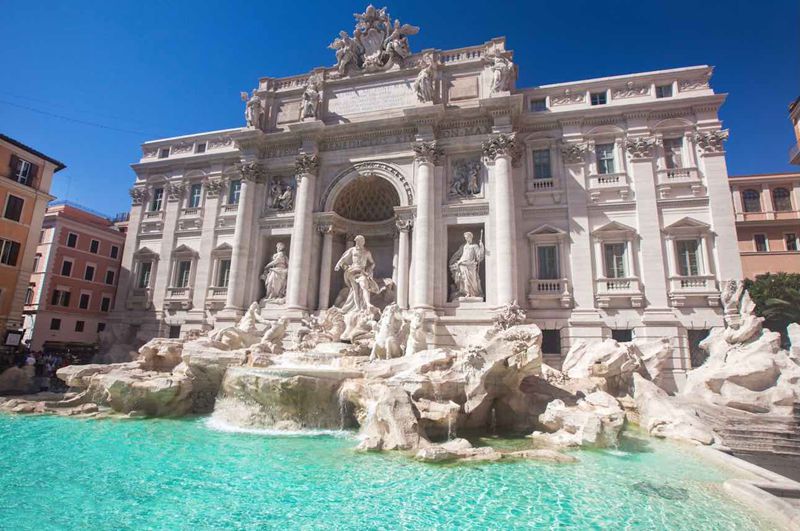 The Trevi Fountain structure is built on top of an already existing ancient water source, built in Roman times in 19 BC. The structure is set centrally, marked at the junction of the three main roads. The name “Trevi” comes from this place and means “Three Street Fountain”. As the city grew, the fountain existed until 1629, when Pope Urban VIII thought the ancient fountain was not grand enough and ordered a renovation to begin. He commissioned the famous Gian Lorenzo Bernini to design the fountain, and he created many sketches of his ideas, but unfortunately the project was put on hold due to the death of Pope Urban VIII. The project was not restarted until a hundred years later, when architect Nicola Salvi was assigned to design the fountain. Using Bernini’s original sketches to create the finished work, Salvi took more than 30 years to complete, and the final product for the Trevi Fountain was completed in 1762. 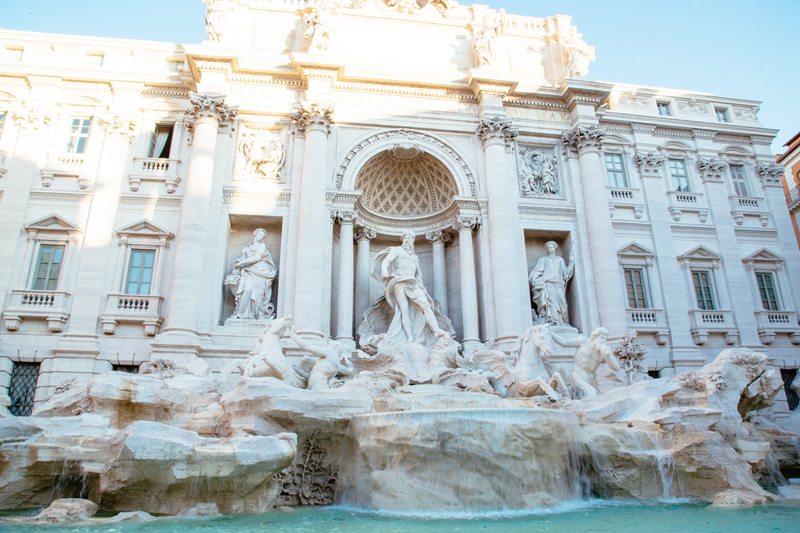 What makes this fountain so special is the stunning artwork within the structure. The fountain and its sculptures are made of pure white travertine stone, the same material from which the Colosseum was built. The theme of the fountain is “taming the waters” and each sculpture symbolizes an important aspect of the city. The central structure is Poseidon, who can be seen standing on a chariot gliding by seahorses. In addition to Oceanus, there are other important statues, each representing specific factors such as abundance and health. 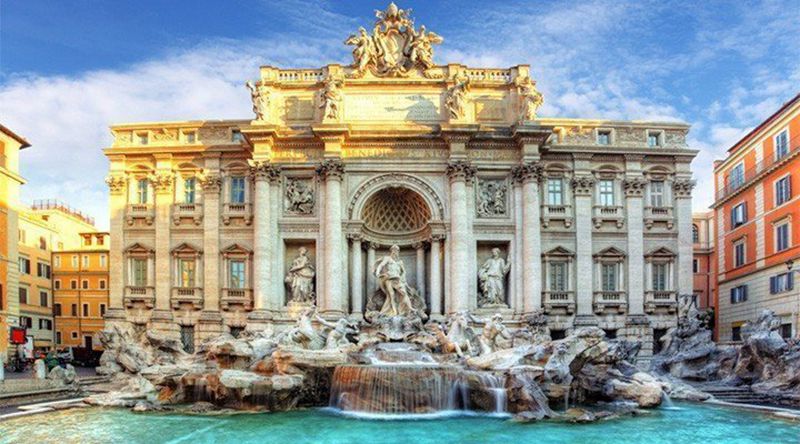 The Good Tale of the Fountain

No matter how much you know about this fountain, we can guess that you will know the tradition of coins. Become one of the most popular tourist experiences in all of Rome. The ceremony requires visitors to take a coin, turn away from the fountain, and toss the coin into the fountain over their shoulders. Legend has it that if you drop a coin into the water, it guarantees you will go back to Rome, while two means you will come back and fall in love, and three means you will come back, fall in love and get married. There is also a saying that if you flip a coin: you will go back to Rome. If you flip two coins: you will fall in love with a charming Italian. If you flip three coins: you’ll marry whoever you meet. To achieve the desired effect, you should toss the coin with your right hand over your left shoulder. Whatever you hope for when you flip a coin, try it while traveling in Rome, it’s truly a tourist experience worth checking out! 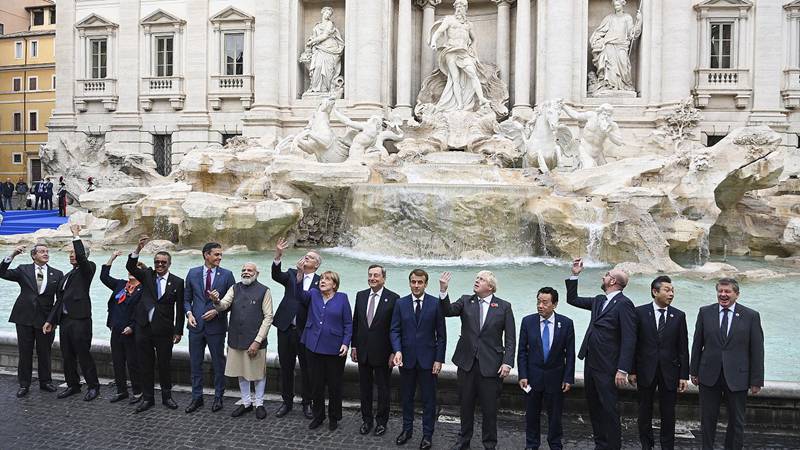 Some Lesser Known Facts About the Trevi Fountain in Rome

The name “Trevi” means “Tre Vie” and is said to refer to the intersection of three roads on the Crossroads Square. There is also a famous goddess named Trivia. She protects the streets of Rome and has three heads so she can see what’s going on around her. She was always standing on the corner of three streets. 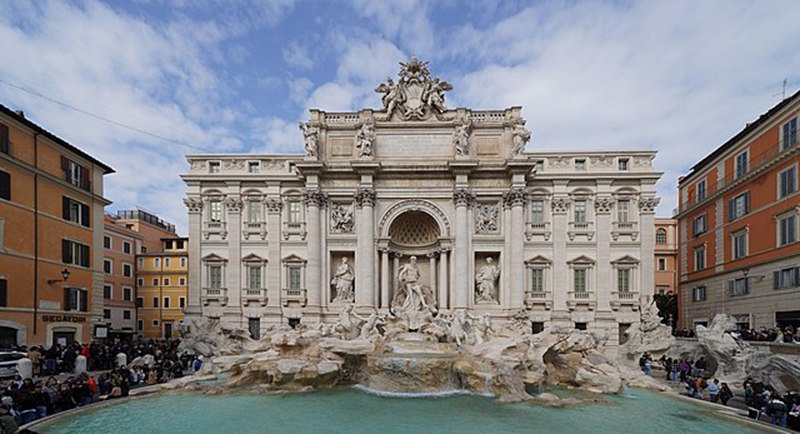 In the Middle Ages, public fountains were purely functional. They provided the people of Rome with fresh drinking water from natural springs, and they brought buckets to the fountain to collect water to take home. The first Trevi fountain was designed by Leon Battista Alberti in 1453 at the terminal of the old Aqua Virgo aqueduct. For over a century, this Trevi Fountain has provided Rome’s only supply of pure water. 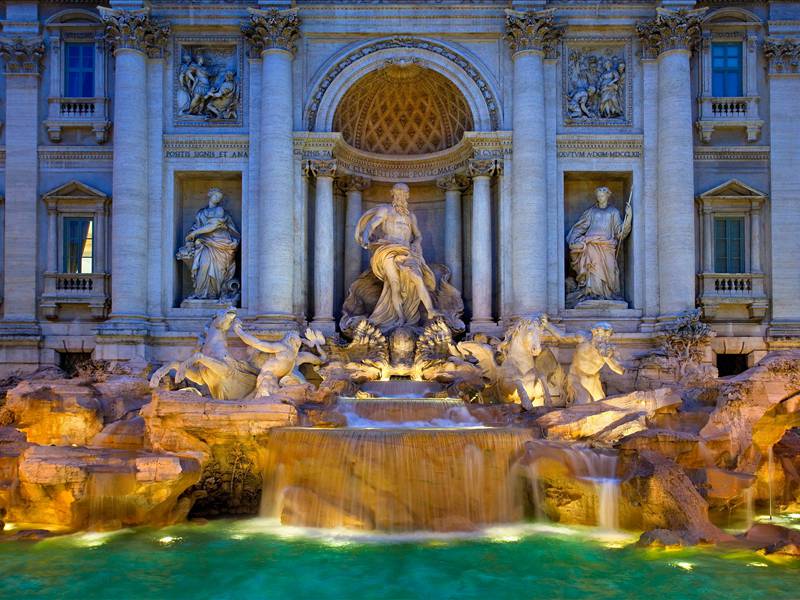 The central part of the Trevi Fountain is Oceanus, the Greek god of the sea. Unlike Neptune, which has tridents and dolphins, Oceanus is accompanied by a half-human, half-merman seahorse and Triton. Salvi uses symbolism to visualize an essay on water. The restless horse on the left, the troubled Triton, represents rough seas. Triton, leading the calm steed, is a sea of ​​tranquility. Agrippa on the left is plentiful and uses a fallen vase as a source of water, while Virgo on the right symbolizes health and water as nourishment. 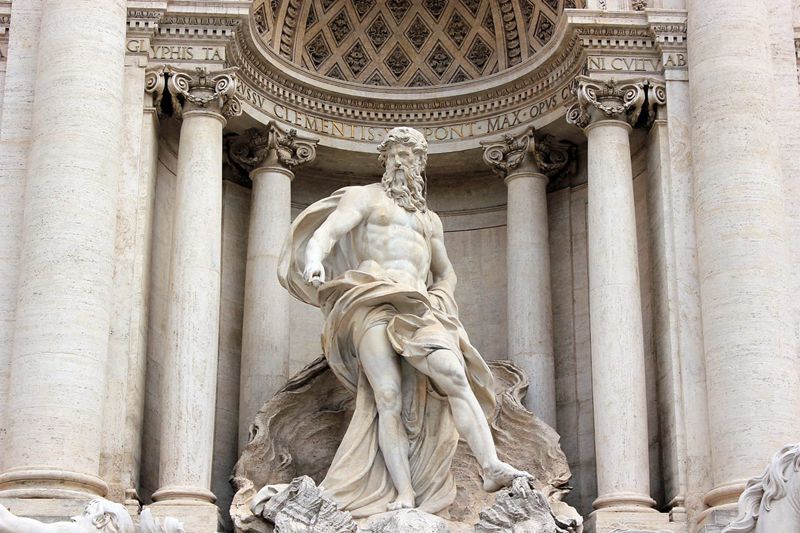 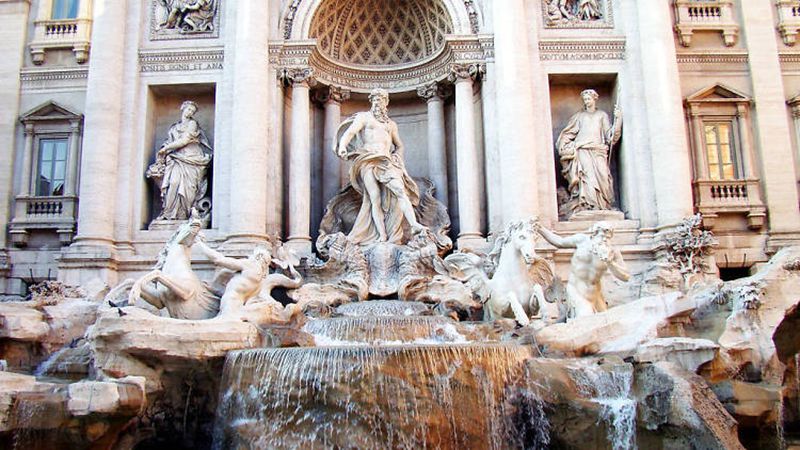 A sip of water is accompanied by a coin into the fountain to ensure not only a quick but safe return to Rome. The ritual dates back to the ancient Romans, who sacrificed a coin in lakes and rivers to appease the gods and help them get home safely. Others claim the tradition stems from early attempts to use crowdfunding to cover maintenance costs. 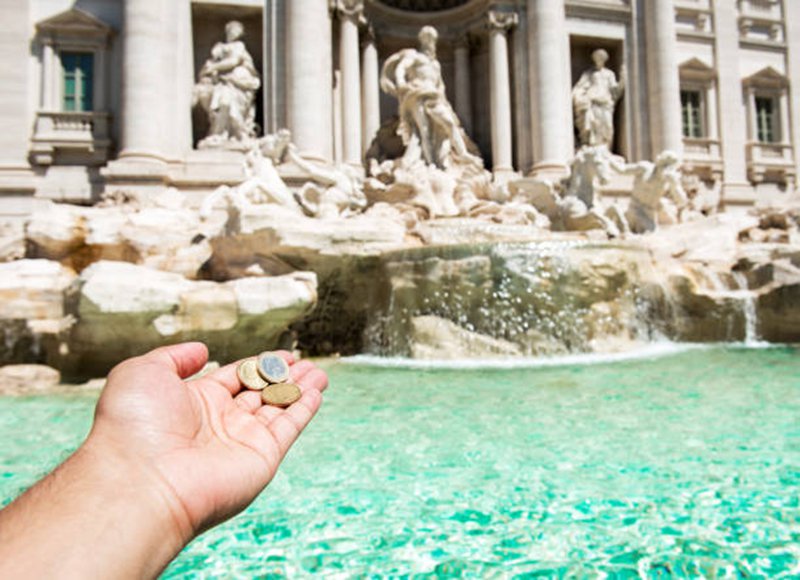 Wikipedia estimates that 3,000 euros are thrown into the wishing well every day. The coins are collected every night and donated to charity, an Italian organization called Caritas. They use it in a supermarket project, providing recharge cards to those in need in Rome to help them buy groceries. An interesting statistic is that about one million euros worth of coins are withdrawn from the fountain every year. The money has been used to support causes since 2007. 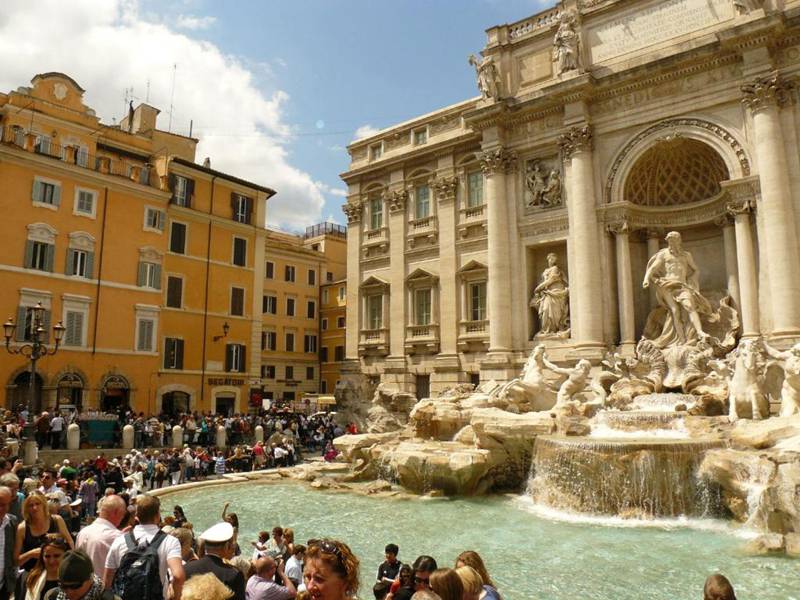 Nathaniel Hawthorne wrote about the Marble Faun of the Trevi Fountain. Fountains have featured in films such as “Coins in the Fountain” and “Roman Holiday” starring Audrey Hepburn and Gregory Peck. Probably the most recognizable scene of the Trevi Fountain comes from Dolce Vita with Anita Ekberg and Marcello Mastroianni. In fact, the fountain was closed and draped in black crepe in honor of actor Marcello Mastroianni, who died in 1996. 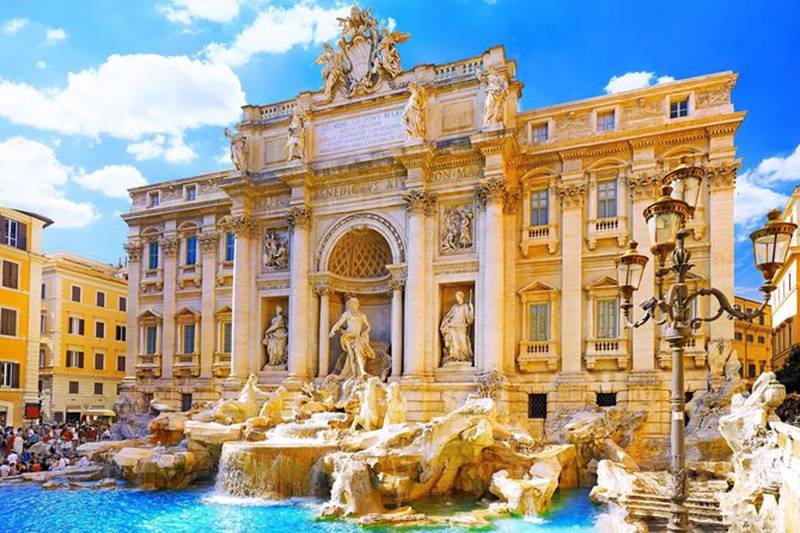 What is Baroque Architecture?

Baroque architecture, an architectural style that originated in Italy in the late 16th century, and continued into the 18th century in some regions, notably Germany and colonial South America. It originated in the Counter-Reformation when the Catholic Church launched an overtly emotional and sensual appeal to believers through art and architecture. Complex building floor plan shapes, often based on ellipses and dynamic spaces of opposition and interpenetration are conducive to enhancing a sense of movement and sensuality. Other characteristics include grandeur, drama, and contrast (especially when it comes to lighting), curvaceous, and often dazzling rich finishes, twisting elements, and gilded statues. The architects unabashedly applied bright colors and an ethereal, vivid ceiling. Prominent Italian practitioners include Gian Lorenzo Bernini, Carlo Maderno, Francesco Borromini and Guarino Guarini. Classical elements toned down the French Baroque architecture. In Central Europe, the Baroque arrived late but flourished in the work of architects such as Austrian Johann Bernhard Fischer von Erlach. Its influence in England can be seen in the work of Christopher Wren out. Late Baroque is often referred to as Rococo, or in Spain and Spanish America, as Churrigueresque.